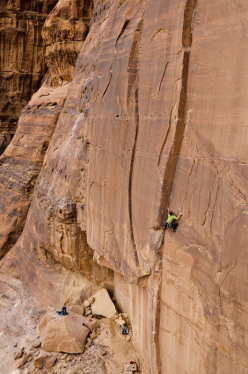 In December 2014 the Slovakian rock climbers Jozef Kristoffy and Martin Krasnansky made the first ascent of Fatal Attraction (8a+, 450m) at Jebel Rum, a contender for the hardest multi-pitch climb in Jordan.

Towards the end of 2014 the Slovak climbers Jozef Kristoffy and Martin Krasnansky spent a month climbing in Jordan with the aim of establishing a new difficult route in the Wadi Rum area. After locating a possible line on the NE Dome in the Jebel Rum massif, they started their ground-up attempt, forging 6 new pitches (8a+, 6a+, 6c+, 6c+, 7a, 7b) to reach the Champs-Élysées ledge. Here they joined the route Ramedame, first climbed by the Remy brothers, and followed this for 6 pitches to the summit. The new route is called Fatal Attraction, is 420m high in total, has bolted belays and only 11 bolts on the new pitches, and was redpointed as a team in 10 hours of climbing on 4 December. The next three hours were made making what they describe was a "demanding" abseil descent down the route King Hussein.

Kristoffy and Krasnansky then repeated two of the hardest multi-pitch climbs in Jordan, namely Glory established by Israel’s Ofer Blutrich (6a, 6c, 8a+, 7c+/8a, 6c, a sport climb, only quickdraws are needed for a repeat) and Rock Empire established up Jebel Rum’s East Dome (1560m) in November 2005 by Czech climbers Benes, Sobotka and Rosecky (4, 6c, 7b+, 8a, 7b+, 6b, 7a, 6b, 5 + 7 pitches of Raid Mit the Camel). Having repeated these, the Slovaks now believe their Fatal Attraction is significantly more difficult and "traditional" compared to the other routes. A full set of friends (including micro and nr. 4, 5, 6) and nuts is needed and apart from the lower half of the first pitch there are almost no other bolts along the route.