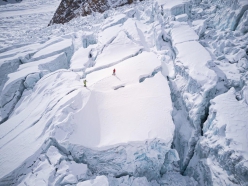 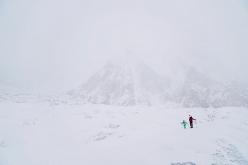 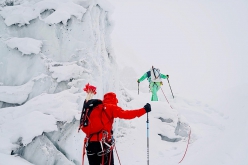 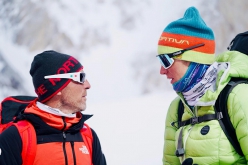 After a terrifying fall into a crevasse, fortunately without serious consequences, Simone Moro and Tamara Lunger have ended their winter expedition to Gasherbrum I and II in Pakistan.

Simone Moro and Tamara Lunger have abruptly ended their winter expedition to Gasherbrum I and II in Pakistan after a terrifying fall into a crevasse that could have had disastrous consequences. After spending 10 excruciating taxing days negotiating a route through the labyrinth of crevasses and seracs above Base Camp, the two mountaineers were ascending to Camp 1 when Simone Moro suddenly fell into a crevasse. Only reflexes, skill and luck saved them, as Moro recounts in his facebook report published below. The two had planned to attempt the hugely difficult traverse GI and GII in winter and it goes without saying that the expedition has now been called off and that they are eagerly awaited safe and sound at home.

ALL’S WELL THAT ENDS WELL by Simone Moro
All's well that ends well. Without going too far around the concept, yesterday we really came just a breath away from a tragic and disastrous epilogue for both Tamara and me.
We were planning to spend two nights on the mountain, reach camp 1, sleep there and then head to camp 2 the next day.

We were FINALLY out of the icefall, we had passed the last big crevasse and proceeded to the summit plateau. Always tied up because we knew that the crevasses were always lurking and antennas were always straight but the morale was high and the satisfaction of having overcome everything. The big ice maze. But the day was not over and what lay ahead was terrible.

Approaching a crevasse I put myself in position as always to secure Tamara who first crossed it and then moved into the safety zone, 20 meters beyond the crevasse.

Then it was my turn and after a split second, a chasm opened under my feet and I fell. Tamara suffered such a violent tear that she literally flew to the edge of the crevasse while I free falling upside down for 20 meters banging back legs and buttocks on the blades of ice suspended in the endless gut where I continued to descend. No more than 50 cm wide, in complete darkness.

Above Tamara had the rope wrapped around her hand and held it like a vice and caused her excruciating pain and numbness. I was in the dark and she was slowly sliding down the edge of the crevasse. All complicated by the fact that she had snowshoes on her feet. I managed with one hand to put a very precarious first anchorage and, while feeling myself slowly descending towards the abyss, I had the lucidity to take the ice screw I had in my harness and secure it in the smooth and hard wall of the crevasse. That screw stopped me from slipping and probably pulling down Tamara into the crevasse.

From there, without going into details, we invented the way out. Almost two hours later. hours of contortion and an excruciating effort I was able to climb up in piolet traction the whole crevasse, completely in the dark and squeezed between two walls 50 cm wide.

Shivering and with a thousand bruises I hugged Tamara who was also crying from the pain in her hand. While I was climbing she had managed to organize a nice recovery stop and to secure me while I was climbing the 20 endless meters of smooth ice. We descended to base camp, who had already been alerted and reassured by radio.

Today I organized the evacuation with a request for medical checks for both of us. Today the pains are obviously stronger and Tamara's hand is partially numb out of use.