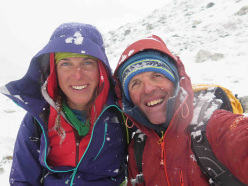 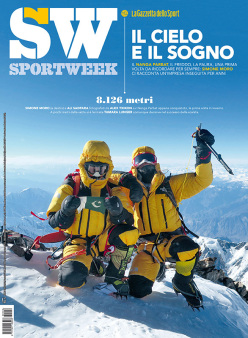 Nanga Parbat in winter: the front cover of SportWeek, with Ali Sadpara and Simone Moro on the summit
Photo by La Gazzetta dello Sport

Simone Moro and Tamara Lunger: how the climbing partnership was formed that, together with Ali Sadpara and Alex Txikon, paved the way to the historic first winter ascent of Nanga Parbat (8126m, Karakorum, Pakistan).

Everything, or pretty much everything, has been said about the first winter ascent of Nanga Parbat. All - absolutely all - newspapers, TV, & radio stations, and above all, websites have reported extensively about the climb. And will certainly continue to do so for a long time yet. Unsurprisingly so, since the chances of success for Simone Moro, Tamara Lunger, Ali Sadpara and Alex Txikon were practically nil. Bookmakers would have agreed on nigh evens odds for those crazy enough to hedge their bets on a successful summit. For a thousand reasons. Starting with the objective conditions the mountain was in, such as tremendous cold, the impossible winds, the exhausting fatigue, the altitude, the technical difficulties, terrible weather and all those risks that always lie in store on 8000ers and in particular on a mountain like Nanga Parbat. Because up there, in summer and therefore all the more so in winter, even the most simple mistake can transform into disaster, into a veritable tragedy.

But there is more. You mustn’t forget, for instance, the endless waiting game (80 days!), the impossibility of acclimatizing properly, the need to keep motivation high, to make the right choices and not ... "lose it". In short, they had to believe it was possible, continue to believe in the impossible, without fail! Regardless of everything. Even if, as some commented here and there on the web, all of the above doesn't seem so "difficult" after all. And if making the first winter ascent of Nanga Parbat up the "normal" Kinshofer route isn’t such a great feat, well, go ahead, give it a try… The truth, as all alpinists, in particular Himalayan mountaineers, know well fell, is that success (the summit) and failure are separated by small and big decisions. Small misfortunes, as well as huge amounts of luck. Often, possibly even always, it’s these details that count... Such as being capable of forming the right climbing partnership. Or, better still, knowing how to be a part of a partnership.

So for this first winter ascent of Nanga, it’s clear that the right partnership is the one that combined the forces of two teams, one comprised of Simone Moro and Tamara Lunger, and the other comprised of Ali Sadpara and Alex Txikon. This, put blatantly, is proven by how things turned out, by the summit. But this combination of strengths is also re-proof of the fact that joining forces, knowing how to work together as a team, being generous, is important. Is what makes the difference in mountaineering, too. Of course, much could be said - as some are already doing - about whether someone deserves more merit than others. But this tends to be a useless, if not even misleading exercise: on climbs as long and demanding as this one (5 days for the ascent and 1 for descent) it’s the team that wins, the overall partnership. And of course some wonder about whether those who "worked" on the mountain before the final rush (eg Daniele Nardi) played a role, and how instrumental it was, in the successful outcome. The answer is simple: yes he played a role. Because - like all other mountaineers of those 31 expeditions in the 28 years of attempts prior to this first winter ascent - he too is a part of that story, and those stories, that led Moro, Sadpara and Txikon to the summit and Tamara Lunger a mere and 100 meters from the highest point.

Which leads neatly to the next point: Nanga in winter is also the story about Tamara who was ill (she threw up) on the decisive push. According to the first information provided by her climbing partners, Tamara then battled hard all day but then, just when it seemed in the bag, she decided to abandon her attempt turn back in order not to complicate the others’ descent. This too is part of knowing how to be part of a team, of alpinism. It was certainly the right thing to do to ensure a safe descent. But no one will ever know how much this decision cost her. Perhaps not even she knows the truth. Just like few perhaps know the background to Tamara Lunger the mountaineer, how she ended up all the way up there, on Nanga Parbat in winter, climbing with Simone Moro. This too is an important part of understanding this first winter ascent, and also more about what sort of alpinist Tamara is.

It all began in middle school. Her P.E. teacher wa Barbara Zwerger, who happens to be Simone Moro's wife. Well Barbara, who is also a talented alpinist and athlete on the ice climbing competition circuit, immediately sensed that the girl from Sankt Valentin in the Eggental (South Tyrol) had something special: an "engine" but also a "mind" that has few equals. This became evident at the school cross country race. Tamara, during her first ever competition, lagged behind the field. Her teacher, Barbara, screamed out that if she wanted to qualify for the county then she’d have to overtake at least 5 competitors. Which Tamara did. Yes, she certainly knew how to deal with the "pain", actually, she seemed to love sufferfests. This is fundamental pre-requisite in order to be successful in any sport, and absolutely indispensable for high altitude mountain climbing. Having said that, this attribute must be firmly planted in her DNA, seeing that her father was a great ski mountaineering champion. With this background Tamara then went on to excelling in athletics (two times Italian vice-champion in discus throwing) but above all she soon became one of the leading lights in ski mountaineering competitions (under-23 World Champion in 2008 and 2 times Italian Champion).

In the meantime, Barbara never touch with the former student. She introduced her to climbing and also helped her realize a dream she’d always had: to climb in the Himalayas. A dream that, at the end of high school, Tamara expressed clearly by asking Simone Moro "when will you take me to the Himalayas" during the prom (which Barbara had had "forced" him to attend). And Simone promised: he’d take her with him to the Himalayas. No concrete plans were made though and things remained at this, suspended, until four years later when, in 2009, Tamara raised the question once again on Skype, "So when exactly are you going to take me to the Himalayas?" And this time things turned out just as she hoped, Simone agreed: she could accompany him to Cho Oyu! After that expedition they returned home with "only" with Island Peak (6189 m), because that year China closed it’s borders with Tibet to celebrate the 60th anniversary of the People's Republic. But by now the die is cast and Tamara would prove unstoppable.

In 2010 she reached the 8,516 metre summit of Lhotse, at a mere 23 years of age, the youngest woman ever to succeed. But to achieve this she used supplementary oxygen and wasn’t happy in the slightest! She sore she’d never use it again. And has kept this promise. In 2010 she attempted Cho Oyu without success, also because the death of Walter Nones shocked both her and all the other alpinists operating on that mountain. In 2011 she climbed Khan Tengri (7010m). This was followed by Muztgah Ata (7546m), while in 2012 she returned to the eightthousanders by attempting Broad Peak (8047m). In 2013, another important summit: Pik Lenin (7134m) and also her so-called "The great crossing", i.e. a 150km ski mountaineering traverse across Pakistan, via two virgin, unnamed peaks 6345m and 6489m high. Then, a year later, came the standout moment, the summit of K2 (8611m), only the second Italian woman to do so after Nives Meroi.

At this point, by now it’s 2015, Tamara’s Himalayan dream becomes more and more real. And is backed up by the unexpected news: Simone Moro suggested they team up for a winter ascent of Manaslu. Compared to the story that has just been told, it’s almost as if things have now come a full circle, although few believed it. They probably didn’t know this background, nor Moro’s ability to "see" and "choose" his climbing partners. An example of this is strong and close-knit partnership he formed with Denis Urubko (when the Kazakh mountaineer was practically unknown), that resulted in some of their most beautiful achievements, such as the two first winter ascents (Makalu and Gasherbrum II) and the first ascent of the North Face (along with Bruno Tassi) of Khali Himal, or Baruntse North (7066m). During the Manaslu winter expedition Simone and Tamara, as many know, didn’t reach the summit. But it planted the seed for a true climbing partnership, and was a small and absolutely fundamental step for their (great) Nanga Parbat ascent in winter.