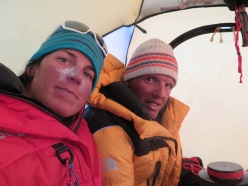 Tamara Lunger and Simone Moro make the first winter ascent of Pik Pobeda, in Siberia. In this 2017 photo the two alpinists are at Camp 3 of Kangchenjunga
Photo by archivio Moro, Lunger 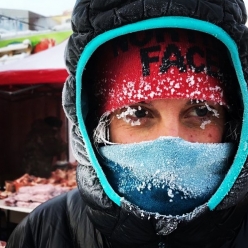 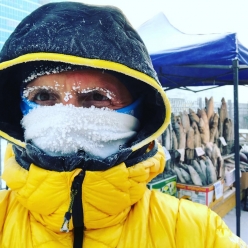 Simone Moro at Yakutsk in Siberia
Photo by Simone Moro

Simone Moro and Tamara Lunger have carried out the first winter ascent of Pik Pobeda, also known as Gora Pobeda and at 3003 meters the highest mountain in Siberia, Arctic Polar Circle.

After climbing for 7 hours, at 15.37 the other day the Italian mountaineers Simone Moro and Tamara Lunger reached the summit of Pik Pobeda, a 3003 meter high mountain in Siberia’s Chersky Range. This region is classified as one of the coldest on the planet, hence its nickname The Pole of Cold.

Having set off from Italy on 22 January, Moro and Lunger began the long journey towards the mountain’s base camp, reached with the help of reindeer that hauled their gear on sledges. After setting up Base Camp the duo waited for the right forecast and set off for the summit, retiring to BC 11 hours later.

"It snowed all day long, but there was good visibility. It was extremely cold! How cold we do not know yet, we'll check and tell you." Moro explained by sat phone. At base camp the temperature had dropped down to -40° C, and in the expedition report that no doubt will arrive in due course, one can expect even colder temperatures.