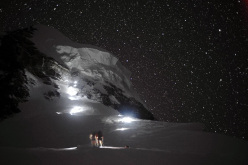 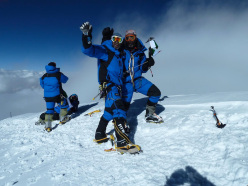 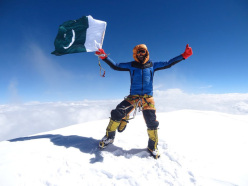 Numerous successful K2 summits were registered on the 26th of July, sixty years after the first ascent of the second highest mountain in the world carried out by the historic Italian expedition. Successful ascents include those of K2 expedition 60 Years Later, supported by EvK2Cnr, which managed to place six Pakistani mountaineers on the summit: Hassan Jan, Ali Durani, Rahmat Ullah Baig, Ghulam Mehdi, Ali and Muhammad Sadiq, and the Italians Michele Cucchi and Giuseppe Pompili. Further Italian summits were made by the South Tyroleans Tamara Lunger and Klaus Gruber, while Radek Jaros from the Czech Republic has now completed the tour of all fourteen 8000ers.

Lino Lacedelli and Achille Compagnoni set foot on the summit of K2 on July 31, 1954. It was the first time that man stood on top of the second highest mountain in the world, on the most difficult of all fourteen 8000ers. History recounts of the incredible performance of Walter Bonatti and the Pakistani Hunza Madhi who in transportingthe oxygen bottles to the last camp provided an absolutely essential contribution to the expedition's success. The first ascent was a historic success for all of Italy, the helped to improve the country's image and instill confidence in its population that was still trying to redeem itself after the end of the Second World War and that paved the way to the phenomenon referred to as the "economic miracle."

Bearing this in mind it becomes evident that, 60 years on, the ascents carried out last weekend take on a different meaning. It is particularly significant that among the many peaks there are those of the first Pakistani expedition: on July 26 six mountaineers from Pakistan summited K2, namely Hassan Jan, Ali Durani, Rahmat Ullah Baig, Ghulam Mehdi, Ali and Muhammad Sadiq. All are members of the expedition K2 60 Years Later, supported and designed by the Italian EvK2Cnr association. It's great too that the six reached the summit without the use of supplementary oxygen, as they alternated along the famous traverse and Bottleneck with some Sherpas who used oxygen. This is a great success and a great joy and a worthy reminder of Madhi, the Hunza who together with Bonatti was fundamental to that first ascent 60 years ago.

The other Italian summits are just as beautiful, namely those of Michael Cucchi, the famous 44-year-old mountain guide from Alagna who supported the Pakistani team and then even managed to treat himself with the summit (without oxygen) and also his first 8000er, just like Giuseppe Pompili from Bologna. And then there are the summits of the two South Tyrolean alpinists, belonging to a different expedition, Klaus Gruber and Tamara Lunger, the class athlete and ski mountaineering champion who shared her joy on FaceBook as follows: Back to BC safe and sound. I am very happy of this expedition! It's a special mountain and so beautiful to me. I am very proud we summited without any help, neither porters nor oxygen! I am living a dream!"

Further summits were registered in the same period including (as reported by explorersweb) that of Radek Jaroš who has now completed – as the first alpinist from the Czech Republic – his grand tour of all 14 eightthousanders, as well as Britain's Adrian Hayes and the three Nepalese Maya Sherpa, Pasang Sherpa and Lhamu Yangzum Dawa Sherpa who in doing so have crowned their dream of the first female Nepalese expedition to K2. This short list of successful ascents is probably incomplete.

And to round things off, Italy's Simone Origone failed to summit but his story is worth far more: the mountain guide from the Valle d'Aosta and member of the EvK2Cnr expedition, as well as speed skiing world record holder, was at 8200 meters when the Pakistani mountaineer Hassan Muhammad got into trouble. Origone abandoned his summit push and descended to help his climbing partner. Nothing more needs adding, other than a sincere bravo!