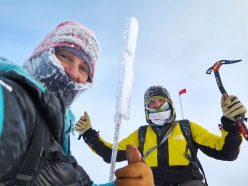 Tamara Lunger and Simone Moro on the summit of Pik Pobeda, Siberia on 11 February 2018.
Photo by Tamara Lunger

The short film of the first winter ascent of Pik Pobeda, carried out by Simone Moro and Tamara Lunger. The highest mountain in Siberia is known as one of coldest places on earth.

On 11 February 2018 the Italian mountaineers Tamara Lunger and Simone Moro completed the first winter ascent of Pik Pobeda. Standing at 3003 meters, this is not only the highest mountain in Siberia’s Arctic Circle, but also one of the coldest places on the planet.

Moro explained that "Had we been in Nepal or in the Karakorum, in the Himalayas, Andes or in Patagonia even, I would have known exactly what might have happened and I would have felt at home. As it was, we climbed into the unknown."