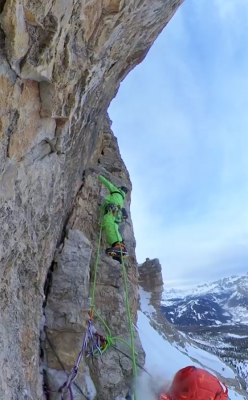 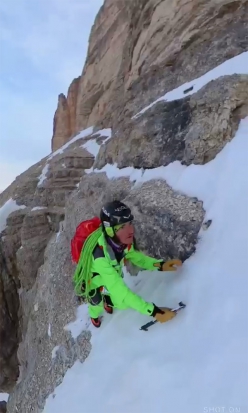 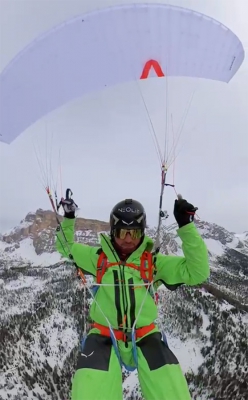 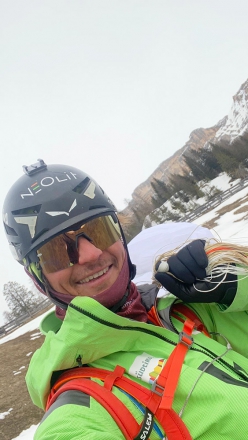 Yesterday Simon Gietl made a winter solo ascent of Große Mauer / Grande Muro on Heiligkreuzkofel / Sass dla Crusc in the Dolomites. The mountaineer the South Tyrol, Italy, returned to valley by paraglider.

Precisely a week after his winter solo ascent of Mittelpfeiler, aka Pilastro di Mezzo on Heiligkreuzkofel / Sass de la Crusc in the Italian Dolomites, Simon Gietl made his way back into Val Badia to climb Große Mauer on his own. First ascended in 1969 by Reinhold Messner and Hans Frisch, this exposed line with its famous flake and traverse is also referred to as Grande Muro.

Last Thursday Gietl had taken his sleeping bag, stove etc for a bivouac but this turned out to be superfluous since he made faster progress than he had originally thought and reached the summit that day. This time he left his bivy gear behind and instead packed his lightweight paraglider, which enabled him to quickly descend back down into the valley after tagging the summit.

Having left the car at 5:30am, at 8:00am Gietl started climbing at a steady pace and he reached the summit at 12:15. The first pitch was climbed with crampons strapped to his mountaineering boots, all the rest with climbing shoes. At the summit he was met by his friend Manuel Hofmann and after identifying the right place for take-off, at 14:00 he was back at the car. "I can hardly believe it myself" Gietl told planetmountain.com "also because I've only been flying for just under a year! Combining a solo climb with paragliding is a new step forward for me."

Heiligkreuzkofel is special to the 36-year-old mountain guide who in the past has climbed 14 different routes on this mountain, including the first ascents of Stigmata in 2016 and Voodoo-Zauber in 2014 with Andrea Oberbacher, and Vergissmeinnicht in 2013 with Peter Manhatsberger.