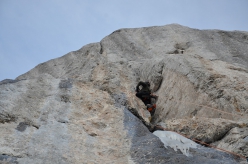 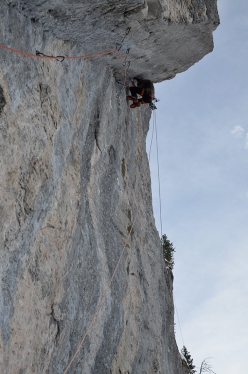 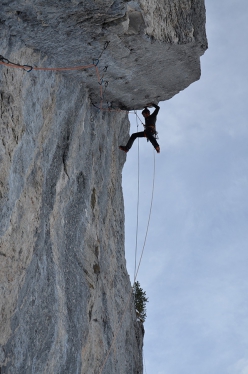 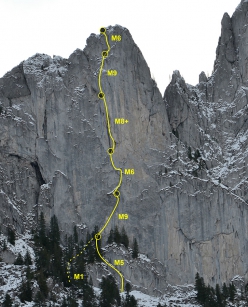 My route is located in the Gastlosen massif in the Friborg Prealps in Switzerland. This massif is best known for climbing in summer and its steep north faces, much less for modern mixed routes. However, there is enormous potential for this form of mountaineering.

My climb starts route 200 meters to the left of the famous Yeah Man on Roche Percé. The line seemed logical, difficult and direct, so I established it over 3 days in autumn 2017, on my own and ground-up.

A few days ago I managed to make the first free ascent with Nicolas Jaquet. The climb offers very steep, sometimes even overhanging sections. Such as on the M9 pitch 5: 2 steep and very difficult meters, with very few footholds, 150 meters above the deck. Pitch two is an overhanging corner with some very technical sections. And even on pitch three there are some difficult moves in an off-width, where the hooks for the ice axes are right at the back of the crack. I’d say the route is very varied and offers all styles of climbing you can get in the high mountains.

Although my climb follows an obvious crack line, it does not offer the possibility of placing sufficient trad gear, except for pitch two which takes some Friends (from C4 0.3 to 0.75). However, I added some bolts on this section because it made no sense to take Friends with you for this single section only.

It’s worth noting that the line shares two pitches of the old aid climb La Dynasty put up by Yves Remy and Patrick Vuilleumier. It goes without saying that the first ascentionists gave me permission to add bolts and climb the route with ice axes and crampons.

The route is called From Kirov with Love and gets its name from the famous movie From Paris with Love with a small change that then creates From Kirov with Love. Why Kirov? Because it’s in this Russian city that there’s the enormous artificial wall used for the Ice Climbing World Cup, close to a hill used for ski jumping. The severity of the route reminded me of one of my trips to Kirov.