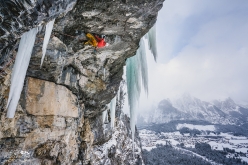 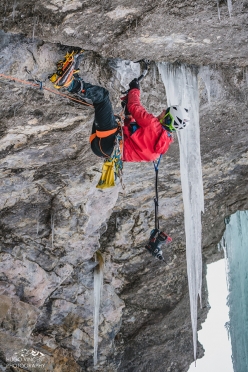 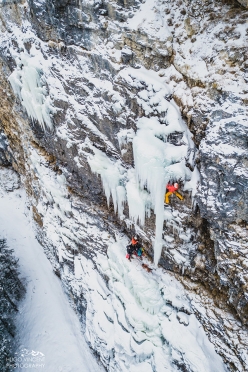 Jeff Mercier climbing towards the end of the second pitch of Röstigraben, Oeschinenwald, Kandersteg Switzerland
Photo by Hugo Vincent Photography 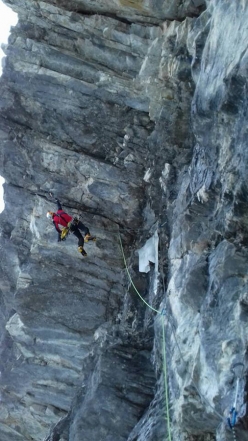 Simon Chatelan, Jeff Mercier and Ron Koller have made the first ascent of two new ice and mixed climbs at the Oeschinenwald sector above Kandersteg in Switzerland.

At first glance new ice and mixed climbs at the world-famous Kandersteg seem an impossibility, but in actual fact the Swiss ice climbing haven continues to deliver the goods. At the end of December 2017 and start of January 2018 Swiss alpinists Simon Chatelan and Ron Koller and France’s Jeff Mercier established two new, spectacular and difficult climbs in the Oeschinenwald sector.

During a preliminary visit at the end of 2017 Chatelan spotted a possible line to the right of Bäretritt (WI5+, 70m) and, taking advantage of a rest day, he and Mercier forged their Röstigraben on December 28th 2017.

"The first pitch breaches poor quality rock" Chatelan explained to planetmountain.com. "The ice is very thin and although not particularly difficult, protected by some bolts. This is followed by a transition pitch past some mixed climbing and steep ice (WI5) that leads to the base of the crux pitch. This, with its 8 meter roof and two intermediate drips, proves very physical (M10+). The climb then finishes up a large hanging drip and another 5 meters of difficult ice. The pitch is similar to Pink Panther M9+ at the mixed sector Ueschenen in Kandersteg, but even more difficult. It is fully bolt-protected."

On 2 January Chatelan returned with Ron Koller to open Loch, Keile et compagnie WI4+. This route tackles a line slightly to the left of Röstigraben and Chatelan and Koller started up with only 6 bolts and a handful of rock pitons, as they wanted to protect it with trad gear as much as possible. The first 35 m pitch deals with difficulties up to M9+, the second moves more easily across WI4+ ice, while the third tackles the jutting roof to join the suspended drip (M8). The grade still needs confirming as the route hasn’t been freed in a single-push yet.