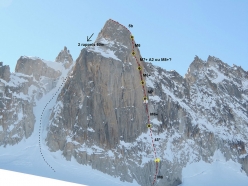 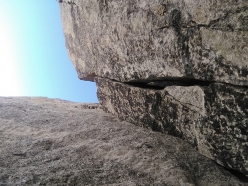 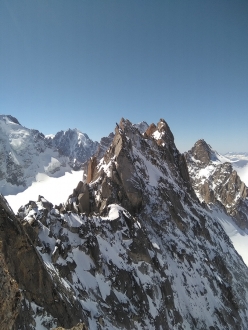 Tête de Biselx is a beautiful 3509m high granite monolith, with a 300m north face that overlooks the Trient glacier. The mountain is located on the Swiss side of the Mont Blanc massif and is relatively unknown, above all because no cable cars lead into this deserted corner of paradise. The 4 hour approach has done a good job at preserving this place and a bivouac is necessary, or a stay at the mountain hut Cabane du Trient (45 minutes from the base of the route), which I highly recommend. Olivier, the hut warden, will be happy to talk to you about the climbs nearby as you drink a little Génépi liqueur.

In April 2016, I forged a new modern mixed and dry tooling route on the lefthand side of the face together with David Pache: "Full dry for Love" 260m and 9 pitches up to M7+. It took us twelve hours spread out over two days to establish this gem. On this climb the rock is full of cracks, and is ideal therefore for dry tooling and protecting with nuts and friends.

It is natural therefore that a year later I wanted to return to climb another new route in the same style on the same face. I had noticed a huge corner - chimney system on the right, marked by a series of cracks and one or two roofs lower down. March and April are the best months to climb here, and they offer a fast approach on skis and an even faster return. After several attempts at finding a climbing partner, a suitable date and a good weather forecast, on the 7th of April I decided to go alone. I ascended the 1400m to reach the hut, weighed down by more than 25 kg of equipment.

On Saturday, April 8th at 5:45 am I crossed the Bergschrund and started to climb the first pitch, up slightly delicate rock. At daybreak I ascended the snow slope to reach the cracks that led to the corner — chimney system. I climbed two dry tooling pitches, both were sustained and 30 meters long. At 11 am I reached the foot of this huge chimney. I was making good progress, despite having to lower off after ever pitch and clean the gear and remove the self-belay device at the belay. The corner - chimney pitch proved technical, but nevertheless easier than expected. By 12:00 I reached the roof, what I believed was the crux section of the climb, and I wasn’t sure I’d be able to climb it free. After resting for 30 minutes I started to traverse diagonally upwards, on insecure flakes. Because of the rope drag and the lack of footholds I decided to complete the pitch using aid, I reckon that section could go free at around M8+ / M9. Once over the roof, the last pitch followed a pleasant crack that led directly to the summit. I reached this at 15:00. I descended via two 50m abseils down the East Face, down the couloir Copt (45°). After an hour I reached the base and my gear, an hour later I was already back at the car.

The name of the route Misanthropie i-conique stems from the fact that after several failed attempts at finding a climbing partner, I decided to make the first ascent of this route on my own.