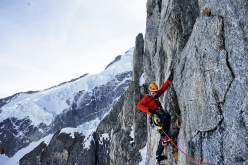 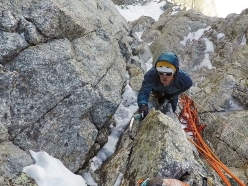 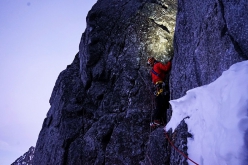 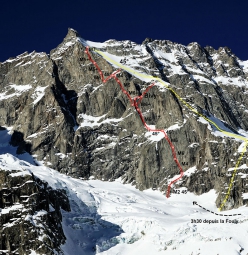 On Aiguille de l'Amône (3586m), Swiss mountaineers Simon Chatelan and Silvan Schüpbach have made the first ascent of L'accidentelle et l'accidenté, described as being a 'challenging mixed climb’ up the mountain’s relatively unknown East Face.

On 27 and 28 February 2019 Swiss alpinists Simon Chatelan and Silvan Schüpbach climbed Aiguille de l'Amône, a 3586-meter peak that despite straddling the border between Switzerland and France, is relatively unknown, probably proximity to its more famous neighbours in the nearby Mont Blanc massif. Its East Dace, however, offers good quality granite and it is here that over a period of two days Chatelan and Schüpbach established L'accidentelle et l'accidenté, which they describe as a "demanding mixed route".

Silvan Schüpbach told planetmountain.com "After deciding not to go climbing in Patagonia, we made plans for an adventure in our backyard mountains. We also decided against the North Face of the Eiger after my friend Julian Zanker lost his life on the Heckmaier route, so Aiguille de l'Amône became our plan C. I liked the idea immediately though: it was a mountain I had never heard of and had granite that promised to be climbed without bolts.

We skinned up and started climbing at noon on February 27th. The start was anything but normal. On the first pitch I slipped while seconding and sprained my thumb. While belaying on the next pitch I got hit in the face by a chunk of ice. I told myself we’d come for an adventure, and had now found it! So I gritted my teeth and carried on climbing. The bivy may have been romantic, but rather uncomfortable. The next day we completed the route without further incidents. The descent down the north face went smoothly on compact snow."

The line follows a series of north-facing ramps and is only the second on the east face. In case of emergency it is possible to abandon the route at various points, directly onto the north face. Beware of avalanches!

27.08.2015
Ulamertorsuaq, Swiss attempt to free climb Piteraq in Greenland
Over a ten-day period in July 2015 Silvan Schüpbach and Bernadette Zak attempted to make the first free ascent of the 1200m high Piteraq up Ulamertorsuaq in Greenland. Except for a 3m pendulum on pitch 22, the swiss alpinists climbed everything free with difficulties up 7c, R, X.