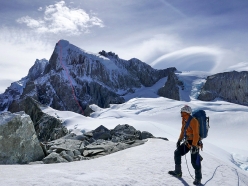 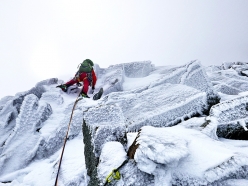 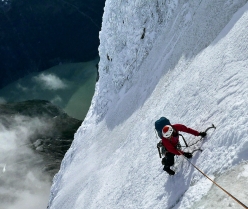 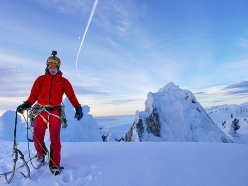 Italy’s Matteo Della Bordella reports about the first ascent of King Kong, the new mixed climb up Cerro Riso Patrón Sur established last February during a 22-day 'by fair means' climbing expedition with Switzerland’s Silvan Schüpbach. The two mountaineers travelled to one of the most isolated areas of Patagonia by kayak.

Between February and March 2018 Silvan Schüpbach and I spent a total of 22 days in one of the most remote and isolated areas of Patagonia with the aim of climbing Cerro Riso Patrón.

This mysterious and little-known mountain is located on the western side of the Hielo Continental glacier, about 70 km from the famous mountains Cerro Torre and Fitz Roy. Cerro Riso Patron has two distinct summits: the Central summit (2,550 m circa), first ascended by Ragni di Lecco climbers in 1988 (Ferrari, Lombardini, Spreafico) and subsequently by a French expedition in 2015 (which went on to receive a Piolet d’or), and the South summit (2,350 m circa). Prior to our ascent this was still unclimbed.

For our expedition we embraced a "by fair means" approach, meaning that we travelled to the mountain by kayak. We set off from Puerto Eden, a small fishing village located in the Chilean fjords about 100 km from where we planned to establish our base camp. Silvan and I already had experience of approaching mountains by kayak from our 2014 expedition to Greenland, and we had planned something similar for quite a while. This time though we wanted to take things one stage further and do something even wilder and go somewhere that offered even more challenging conditions and logistics, such as Patagonia.

We left Puerto Eden on 10 February, kayaks loaded with everything we needed to climb Cerro Riso Patrón and survive for 30 days out in the wild on our own. Sea conditions were good and this enabled us to reach our base camp in the Falcon fiord after just 3 days of navigation.

As soon as we reached our base camp we were faced by a desolate and somewhat frightening sight: instead of the classic lush green forest, full of life, noise and singing birds we were met by a huge brown expanse of sand, earth and uprooted trees, scattered all over the place and littered with blocks of ice, dead fish and seashells. We do not know for certain what had happened but we guess that a sort of "tsunami", presumably shortly before our arrival, destroyed everything within a kilometre and a half.

We knew from the few climbers who had previously attempted Cerro Riso Patrón that the approach would prove extremely challenging and so the day after our arrival we immediately set to work exploring the area.

Faced with various options, we eventually chose a somewhat "acrobatic" approach: the crux involved crossing a large river that flowed out of a glacial lake. I tied a rope around my waist and, after having swum to the opposite side of the lake, we tensioned it about ten meters above the water so that we could make the 80 meter crossing without getting wet. The rest of the approach was what can be described as "routine": marshes, forests and steep grassy slopes led us towards the west face of Cerro Riso Patron.

Finally, on the 15th on February, we pitched our Advanced Base Camp about 1.5 hours from the base of the mountain; we were poised to climb the West Face of Riso Patron Sur, i.e. the main objective of our long journey. The wait for a window of good weather gave us the time to consider different strategies and lines of ascent. Only after patiently waiting at ABC for the last Patagonian storm to settle did the time come for us to try our luck.

As so often happens after many days of poor weather, the mountain was completely encrusted with snow and ice and therefore we chose a line that would allow us to climb with ice axes and crampons. Difficulties during the first 300 meters were moderate, but we were then faced with 25 meters of steep, compact rock. Dry tooling up this section required more than an hour. After we had breached this crux section we then made swift progress, up mixed terrain to a snowfield and, in turn, to a steep ramp of ice. At this point the climbing proved exciting, with crampons and ice axes, past the typical mix of Patagonian snow and ice up to 90°.

At 8.30 in the evening, after 12 hours of climbing and with the sunset behind us, we shook hands and hugged each other on the ice mushroom South summit of Riso Patrón. The feeling of being the first to set foot on this mountain made me feel small in the presence of the vastness of nature and the breathtaking view that unfolded in front of us. We then enjoyed an unforgettable bivouac, sheltered in an ice cave just below the summit mushroom, before starting the descent early the next day.

Back at the base camp it might have seemed obvious to return home immediately. But for us this wasn’t quite so evident, we yearned to climb something else and experience other adventures in this austere and fascinating ice and rock paradise. Numerous possibilities for new and difficult routes beckoned, but much to our disappointment the weather took a turn for the worse and, after having recuperated all our gear from ABC, we got back into our beloved - and hated - kayaks.

The sea journey home was the fitting end to this adventurous challenge: we paddled against the wind almost all the way, so much so that I felt like a cyclist during one of the Dolomites stages of the Giro d’Italia bicycle race: head down and paddle hard, fighting against cramps and fatigue. We received a reprieve on the last day only: the wind turned in our favour and provided us with a triumphal arrival at delightful Puerto Eden!

Daniele Chiappa, one of the four legendary first ascentionists of Cerro Torre in 1974, had dreamt about and even planned an expedition to the mountain similar to ours. Although neither I nor Silvan ever had the good fortune of meeting him, we would like to dedicate our ascent to him. For the dream he harboured, and for all he did for mountaineering, not only in Lecco.