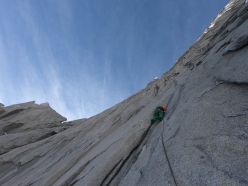 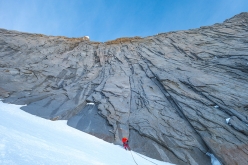 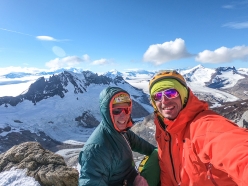 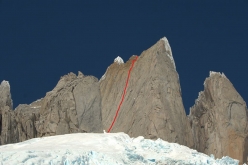 The Ragni di Lecco continue to weave new webs in one of the world’s premier venues for alpinism, namely Patagonia. After the long-awaited weather window, on 25 January the Italians Matteo Della Bordella and Luca Schiera successfully climbed a new line up the NW Face of Cerro Pollone (2600 m). Della Bordella - in Patagonia for his eighth year in a row - and Schiera climbed the 300 meter route and then instead of abseiling down the line opted to descend down the other side of the mountain and make the long night return to El Chalten which they reached 24 hours after having left their tent. The new route is called Maracaibo (300 m, 7a/C1) and Della Bordella has provided the report below. In 2013 the same partnership successfully completed a new route up the West Face of Torre Egger.

The first part of our trip to Patagonia is now almost over for Luca Schiera and myself. After a first reccie onto the Marconi Sud glacier to stash some gear, we got just one window of good weather that provided us with about two days to climb.

In actual fact, during the first of these two days all we were able to do was sit back and watch as these granite giants shook off the layers of snow and ice they had accumulated after so much bad weather. We were there completely on our own, enjoying this spectacle of nature, beneath the immense Piergiorgio face and Pollone, in this corner of Patagonia that is off the beaten track. It was nice to have the time to contemplate the beauty of a places like these where, usually, one is always in a rush.

On the second day snow the face had cleaned up a bit and was relatively free of snow and ice; the time had come for us to start climbing. Our objective was the NW Face of Cerro Pollone: a beautiful sweep of granite which for some reason I’d always imagined being a sort of "vertical beach", up which, strangely, there was only one route, namely the beautiful corner on the right climbed by Gregory Crouch and Jim Donini in 1999.

We set off before dawn on 25 January and although we reached the base of the face at around 7, we preferred to wait a bit before launching upwards because of the cold. Having a large number of lines to choose from, we opted for the one that seemed the most direct and attractive. At about 9 am we began climbing, up a series of corners and cracks, slabby initially, then more and more vertical and overhanging, seeing that the face is formed like a "wave".

Luca and I swung leads up the seven pitches, some of which were really exciting, while others were a bit wet, until about 50 meters below the summit ridge where we were met by poor quality reddish rock. Just before the top of the face we made for a pendulum rightwards that enabled us to return onto compact granite and quickly reach the crest.

Once we reached the ridge we were greeted by increasingly powerful gusts of wind and the incoming bad weather. As on previous occasions here in Patagonia, we opted to descend on foot down the other side of the mountain instead of risking the rappels down the route (which we would have had to equip). We therefore began our long return down Pollone’s normale route, traversing across Hombre Sentado to reach Paso del Cuadrado. This led us to Piedra del Fraile and then down to the village El Chalten, which we reached 24 hours after having left our tent.

Now we still have some days of bad weather forecast here in El Chalten, then the second part of our expedition will start for both Luca and myself. Luca will be joined by another Ragni di Lecco climber, Paolo Marazzi, and they have their sights set on the Paine Towers while I will be joined by Silvan Schüpbach and we aim to climb Cerro Riso Patron. In short, the journey that lies ahead is still long and we hope this great adventure up Cerro Pollone was only the first of many!