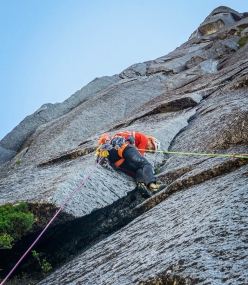 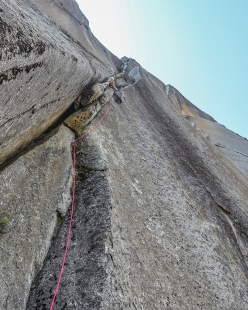 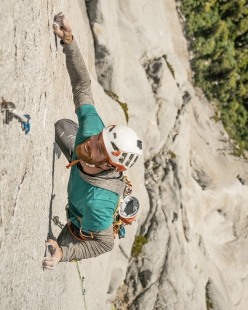 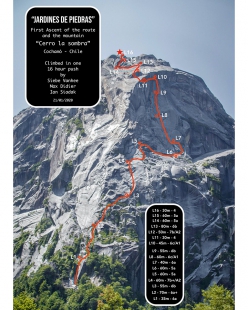 Belgian rock climber Siebe Vanhee has had an extremely productive trip to the Cochamó valley in Chile’s Patagonian Andes where with various partners he has climbed three big walls. With Diego Diazaguilera he carried out what is likely to be the first free ascent of Sundance on Cerro Trinidad, established in 1998 by British climbers Grant Farquhar and Simon Nadin (winner of the first-ever Lead World Cup a year later), while with Max Didier the 28-year-old made the first one-day free ascent of El Condor Pasa up Trinidad Central. True to his nature Vanhee then ventured into the fairly unexplored Valle la Luz with Max Didier and Ian Siadak to make the first ascent of an unclimbed peak they have named Cerro la Sombra via their Jardines de Piedras.

Sundance - A one day fight to free climb
Upon arrival in Cochamó I partnered up with local climber Diego. Talking about potential free climbs he pointed out the route Sundance which goes up the North-west face of Cerro Trinidad (5.12a (7a+) A2+ , 22 Pitches). This climb is mythical because it was put up in 1998 by Grant Farquhar and Simon Nadin and is one of the very first on Cerro Trinidad. According to the locals the route hadn’t seen any repeats. The perfect objective in my eyes! The line tackles the center of the steepest face of the whole wall with 5 steep and challenging aid pitches. The first 2 took me both two tries to send. Definitely pitch 9 was a big fight through dirty, flared and steep cracks. Sending this pitch required some kind of overhanging chimney/stemming skills to avoid using the closed dirty cracks, and some incredible willpower not to fall or give up. My legs and lower back were burning from the body tension needed to stay on the wall. After this crux pitch 3 more similar but less steep aid pitches led us to easier ground.

I led all the pitches while Diego gave me all his confidence, patience and support! In 16 hours, with lot’s of strenuous climbing and tons of support and patience of my partner Diego we managed to reach the summit of Trinidad. Although this send was a huge fight and felt incredibly hard I would suggest a grade of 7c for the crux pitch, if it were clean. But in its current state, hard to protect and to use the cracks. it could easily be 8a. In general, the whole climb is sustained and not a single pitch will let you catch your breath!

El Condor Pasa - Second Free Ascent and first 1-day Free Ascent
At the start of January Max Didier and I attempted what is reputed to be the hardest free climb of Cochamó, El Condor Pasa (8b/20 pitches) on Trinidad Central. We failed to repoint the crux pitch and had to bail because of threatening weather. Later we returned and in only 10 hours I managed to make the full free ascent, almost without a single fall; unfortunately a handhold broke at the very end of this 50m technical pitch, which made me fall. After a 15-minute rest at the belay anchor I was ready for another try, racing against the sun as it almost hit the wall. This time it worked, no mistakes, no stress and above all no breaking holds! The only thing ahead of us were some easier pitches to the summit, we accepted the burning sun and made it to the top.

The route had been put up in 2016 by Slovakians Martin Krasnansky, Jozef Kristoffy and Vladimír Linek. They free climbed it in 6 days right after the first ascent. The climb is almost entirely slab and face climbing and is well-protected by bolts. Although the line sometimes passes obvious crack systems they chose to bolt the slabs, probably because the cracks are blind, flared or dirty. Vegetation in Cochamó is very stubborn, for sure! But the bolts don’t take anything away from the uniqueness of this technical climb! Thanks Max for supporting me on the whole ascent, giving me the opportunity to make two attempts on the 8b crux pitch, and congrats for all the good free climbing!

At the end of our stay in Cochamó our desire to climb a virgin wall and mountain was high. Valle la Luz (where Capicua is situated) is wild and full of rock. Max Didier, Ian Siadak and I walked into the valley past Cerro Capicua and scouted some walls from the river. It didn’t take us long to decide that the unnamed and unclimbed peak North of Capicua would be a great objective. From the valley river, one hour of dense jungle hiking and even vertical jungle brought us to the start of our route. The idea was to sleep at the base and climb the next day, but lack of water and a comfortable bivy forced us to move to the gully on the left of the wall. Here we found what we called the Japanese rock garden. An amazing 20 square meter platform surrounded by cascades, pools and flowers. One of the best bivouac spots the three of us have ever seen.

The next day we managed to climb Jardines de Piedras, 7b+/A2, 16 pitches in 16 hours. Although the start of the wall looked easy, the ledge systems alternated with interesting vertical and technical climbing. At the 4th pitch I got challenged by a very thin crack in a dihedral. The first 30 meters went all free at 7b+, unfortunately the next 30 meters were very dirty, steeper and I was obliged to resort to aid. Approximately A2 because of the technical piton placements. This pitch is the biggest challenge of the climb. In the middle of the face we chose the main dihedral (3 pitches) which brought us up to the lip of the wall. The dihedral went almost all free except for a few dirty and wet meters. From the lip, where you think the climbing would get easier and is almost over, there is still another 6 pitches to the summit. Pitch 11 was a big challenge with some slab runouts and a steep, flared and dirty crack. I made a big effort to free climb but was again obliged to aid the last few meters because of the dirt. Pitch 12 looked intimidating. Max made a proud lead of this one, a sea of slabs and little to no protection. When he ran out of rope we were obliged to climb 20 more meters simultaneously until he was able to make an anchor. From then on it’s just smooth climbing to the summit.

As always the descent was an interesting, but efficient, journey. We descended on the north side of the wall into the gully. We made six rappels at different walls and zigzagged our way down to our basecamp. Descents are always so exciting! We called the route Jardines de Piedras (Gardens of Rock) referring to the surroundings of our basecamp, like the typical Japanese gardens. An amazing 3 day adventure shared in good company. Thanks Max and Ian for this climb!

05.03.2009
Cochamo Valley Chile: new climbs by Austrian dream team
In December 2008 the Austrians David Lama, Barbara Bacher, Katharina Saurwein, Hansjörg Auer, Heiko Wilhelm and Dutchman Jorg Verhoeven travelled to Cochamo Valley in Chile and climbed a series of new routes in this granite valley.
16.03.2005
Italian spiders rock Chile's Cochamo valley
A small Italian Ragni expedition has just returned from a successful 40-day trip to Chile, where it made the most of fantastic weather conditions to climb series of routes in the Azufre and Cochamó valley.