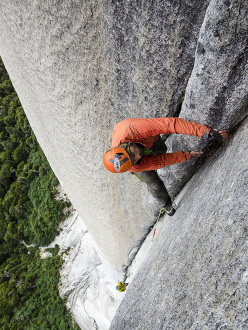 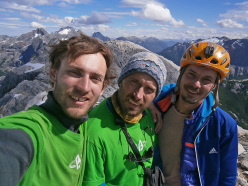 Josef Kristoffy, Vlado Linek and Martin Krasnansky on the summit of Cerro Trinidad Central, Cochamo valley, Patagonia, Chile after having made the first ascent of El Condor Pasa (8b, 700m)
Photo by Kristoffy, Krasnansky, Linek 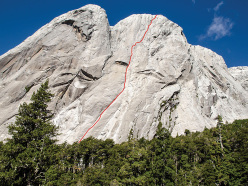 Jozef Kristoffy, Martin Krasnansky and Vlado Linek have made the first ascent of El Condor Pasa (8b, 700m) on Cerro Trinidad Central in the Cochamo valley in Patagonia, Chile.

The trio flew to South America on 28th December for a 5-week trip and, after the endless journey transporting 300 kg of luggage, they finally arrived at the La Junta camp in the Cochamo valley, located about 3 hours on foot from Cochamo village in Northern Patagonia.

After becoming acquainted with the area and gathering the necessary information they decided to climb a new route up the impressive 700 m high NW Face of Cerro Trinidad Central (1720 m). The next three days were spent carrying 300 kg of gear and food to the base of the route, and on 5 January they began their project by following a virgin line circa 50 meters left of Nunca mas Marisco (Angelo Forcignano, Ismaele Fosti, Christian Gianatti, Lorenzo Lanfranchi, Giovanni Ongaro, Simone Pedeferri, 2005) that shares the same start as Tabanos na Cara (5.10c (6a+) A3+, Sergio Tartari, José Luis Hartman, 2000).

Initially the new route led past small, shallow cracks and the Slovaks soon realised that the style of climbing was very different to what they were used to. Formed by water, ice and vegetation, the cracks were so small that jamming fingers and placing pro proved practically impossible, resulting in complex big wall climbing techniques requiring the smallest micro nuts, micro friends and hooks. Furthermore, most of the cracks were dirty and full of weeds and after midday, when the sun hit the wall, climbing became almost impossible as they had to battle against unbearable temperatures and voracious tabanos horse flies.

The Slovaks persevered and, using a mix of aid and free climbing, over the next week they fixed the lower pitches and managed to reach the summit on 14 January 2016. Five pitches were shared with Tabanos na Cara but where this breaks left the Slovaks continued right, parallel to Nunca mas Marisco. From 20 - 25 January they then set about freeing the remaining aid pitches, including the 14th pitch that Kristoffy freed on their last day with difficulties estimated at UIAA X (8b).

Although time had run out for a single push, ground-up ascent, with all pitches freed individually Kristoffy stated "I'm really satisfied, this is my biggest climbing achievement so far: a 50m grade X about 400m above the ground that I myself helped create, thousands of kilometres from home, after 3 weeks of work, lacking food and really exhausted…"

After completing the route the three climbers rappelled and carried all their gear out before enduring the never-ending 5 day trip home. El Condor Pasa is likely to be the hardest climb in the Cochamó valley.