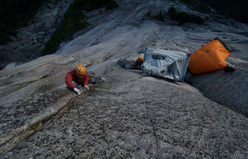 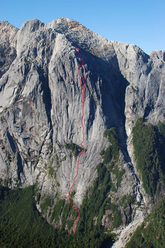 Better late than never: in January 2009 a Swiss team comprised of Ivan Tresch, his brother Michi, Tom Holzhauser and Dominik Angehrn completed a new route up the Cerro Capicua. The four climbers arrived in the "Yosemite valley of South America" and opted for a line in the middle of the granite Cerro Capicua, to the left of the 2001 "Pluja, Fam i Feina" and to the right of the 2005 "Adios Michi Olzowy".

Progress was slow due to vegetation on the wall and after half-height they aided some sections up to A2. They topped out and called their line "Los Gorillas del Norte" (7c, A2, 24 pitches, 1200 meters) but while abseiling they realised that this upper section could be avoided by following a "killer line" further to the right.

After a few days of rest this line was climbed all free at 7c. The bouldery crux was solved by a "full body dyno to a crimp, 800 meters of the deck" and the variation is now called Los Tigres del Norte (7c, 24 pitches, 1200 meters). This is the first free climb up the face andprior to returning home it was climbed in single 11 hour push by Angehrn and Michi Tresch.

29 year old Ivan Tresch has climbed extensively in the Alps, Yosemite, Patagonia and Greenland and he described the experience in Chile as follows: "Cochamo is a fantastic valley. From the last village Cochamo you drive up a dirt road 'till you see only green and the valley begins. You ask yourself whoever would want to climb there? You walk past bamboo and through the thick jungle, then the valley opens up and you catch sight of the first rocks, a long way away and much smaller than they really are. When you finally get to the campsite at La Junta it's like a second birth. The valley unfolds in full splendour and the jungle gives way to green meadows and a stream. The whole area is surrounded by walls, 200-1500m high and you just don't know where to look. The Refugio is run by a Argentine-American couple and is reached by crossing the river on a rope. The rock faces look great from a distance but they're often very dirty and the cracks blind! We cleaned almost the entire route (1200m!) and although it was hard work, once clean it really was worth the effort. The valley is superb!"