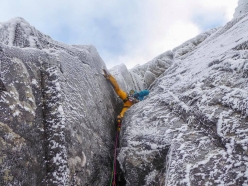 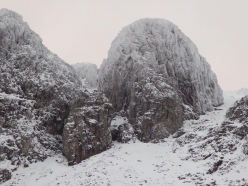 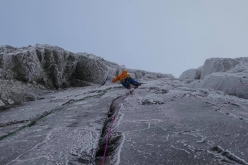 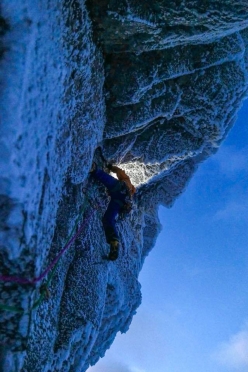 Winter mountaineering in Scotland: on the Church Door Buttress at Bidean nam Bian close to Glen Coe the expert British mountaineers Greg Boswell and Guy Robertson have made the first ascent of Lost Arrow Winter Variation, describing the demanding line as 'one of the most sustained routes' they have ever climbed in the country.

Greg Boswell and Guy Robertson are the usual suspects behind the latest difficult and brilliant winter climb added to Church Door Buttress at Bidean nam Bian close to Glen Coe in NW Scotland. Recognised as being one of the country’s driving forces, the duo climbed a line on Monday that follows much of the summer route Lost Arrow but which, following winter logics, also tackles different terrain to provide "a brilliant winter alternative variation".

Boswell and Robertson hadn’t climbed the route in summer and therefore didn’t know what lay in store. A first attempt last week had to be aborted due to the technical difficulties, hard route finding and the arrival of darkness. The two returned on Monday and, despite starting climbing before dawn, summited in darkness at 6 in the evening.

The five-pitch Lost Arrow Winter Variation has a whopping grade of X/10 and as such is one of the most demanding in the country. What is striking though, more than the grade in itself, is Boswell’s description of the outing: "We agreed, once we had topped out, that it was one of the most sustained routes we had done in Scotland, for amount of hard pitches and climbing that was involved in the route was crazy! It didn’t let up from the base to the top, it really was a special day! It will be very hard to beat that experience this winter, but we’ll definitely give it a good go."

Asked whether this was the main project he’d been training for for months, Boswell told planetmountain.com "Na. I’ve got bigger projects for this winter. But this was just a side project that turned out to be amazing!" If climbing conditions hold out, this winter should prove interesting.

07.12.2017
Early climbing in slow Scottish winter
The winter mountaineering season in Scotland has begun in earnest with three notable ascents on Ben Nevis, Hell’s Lum Crag in the Cairngorms and at Beinn Heasgairnich in the Southern Highlands.

01.12.2015
Greg Boswell and Nick Bullock survive bear attack in Canadian Rockies
Scotland's Greg Boswell was attacked by a bear yesterday while winter climbing in the Rocky Mountains in Canada together with Nick Bullock. The two leading British alpinists thankfully survived the attack without serious injury.