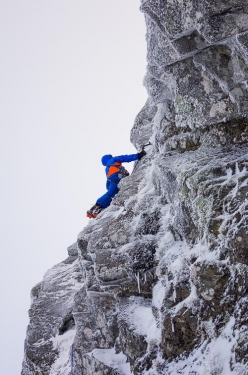 Roger Webb climbing the crux pitch of Androcles (V,5) on Beinn Heasgairnich in the Southern Highlands. This steep pitch through the headwall contained two runners in its 40m length (29/11/2017)
Photo by Simon Richardson / Scottishwinter.com 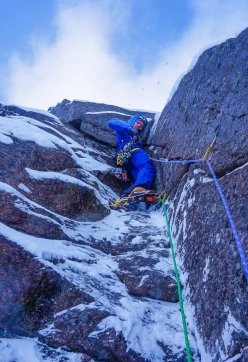 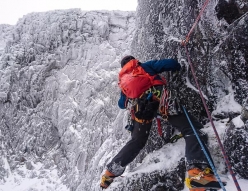 The winter mountaineering season in Scotland has begun in earnest with three notable ascents on Ben Nevis, Hell’s Lum Crag in the Cairngorms and at Beinn Heasgairnich in the Southern Highlands.

After a somewhat sluggish start, the winter climbing activity in Scotland has finally kicked off with two notable first ascents. The first to get in on the action were Steve Holmes and Ken Applegate who on 11 November made the first ascent of Optimists Arête (V,6) up Ben Nevis. This four-pitch mixed outing climbs a blunt arete and then a series of chimneys at the top of Tower Gully to exit 10m to the left of the ultra-classic Tower Ridge. This "surprisingly good route" leads directly to the highest point of the highest mountain in the Scotland.

On 29 November Simon Richardson and Roger Webb visited Beinn Heasgairnich, a little-known cliff in the Southern Highlands that has never been described in any climbing guidebook and, adding to its mystery, is not even indicated on the standard OS maps. Despite its seclusion a series of classic gully and buttress routes had been established mainly by George Allan, John Thomas and Billy Hood, but the most obvious line through the steepest part of the cliff had been left untouched. Richardson and Webb climbed these four pitches now called Androcles past difficulties up to V,5, dealing with the 40 meter crux pitch protected by only two runners and finishing, in the best of traditions, in the dark.

Last but by no means least, on 24 November Guy Robertson and Greg Boswell pulled off what is regarded as the most important ascent this season, namely the first winter ascent of the summer climb The Exorcist at Hell’s Lum Crag in the Cairngorms. Graded HVS (5b) as a summer trad route, the three pitch winter outing is now rated VIII,8, placing it towards the upper end of the Scottish winter climbing scale and boding well for the rest of the season.