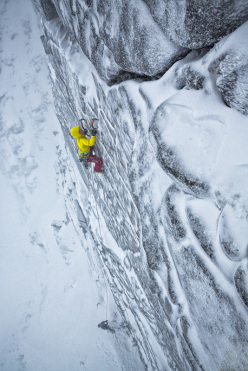 Ines Papert making the first female ascent of The Hurting XI 11 at Coire an t-Sneachda in Scotland.
Photo by Nadir Khan

German alpinist Ines Papert has made the first female ascent of The Hurting XI 11 at Coire an t-Sneachda in Scotland.

Ines Papert returned to Germany yesterday after a short trip to Scotland where she pulled off, amongst others, the first female ascent of The Hurting, the challenging line at Coire an t-Sneachda first climbed by Dave MacLeod in 2005 and hailed, at the time, as the hardest mixed trad climb in the world.

Papert travelled north to speak at the Fort William Mountain Festival knowing she was physically on great form - thanks to her January repeat of the wildly overhanging Ritter der Kokosnuss on Breitwangflue at Switzerland’s Kandersteg - yet acutely aware that Scotland’s toughest winter climbs would demand nerves of steel. After fast repeats of The Secret (Ben Nevis) and Never mind (Coire an Lochain, Cairngorms) on Friday 20 February she made her way to Coire an t-Sneachda together with Seppi Pfnuer to try The Hurting, but it wasn’t to be: she climbed off-route, fell onto a pecker that luckily held, then battled her way to the top. Two days later she returned, this time in full-blown Scottish winter conditions to repeat the route in about an hour of inspirational climbing, as her belayer Simon Yearsley recounts.


A BELAYER'S PERSPECTIVE by Simon Yearsley

The plan was simple: on the last day of her Scottish trip, get Ines on The Hurting. She was super-psyched and frustrated after her and Seppi’s abortive attempt a few days before. The only problem was the weather – the early morning should be good, with light winds around dawn but then getting really nasty by late morning/lunchtime with storm force winds and heavy snow.

We scurried away from the Ft William Festival Climb Night as quickly as politeness would allow, and drove over the Cairngorms. Starry skies and light winds. Perfect. It all changed about 4am when we were both awoken as the campervan rocked in the gusting wind – the bad weather had come in early. Nadir and Ali arrive just after 6am and we were soon all stumbling uphill into the strengthening wind and blustery snow showers.

I’d convinced Ines that the Hurting wall could well be sheltered from the wind, and the best thing was to keep walking and decide when we reached the base of the route. I was wrong. The wall was continually blasted by powerful gusts, violently changing from one direct to the other, sharp snow showers and shrouded in scudding cloud. Ali and Nadir quickly set the abseil photo rope. Ines warmed up, checked her gear one last time and set off.

I’ve been climbing for over 35 years and this was the most impressive lead I’ve ever witnessed: sketchy moves from the start; a couple of bits of poor gear until a secure and comforting sling; then a tenuous traverse before a dubious small hex. Up a few more metres until suddenly the wind was so powerful it simply blew the good sling runner clean off . Oh... 12m up with only a poor hex, in a growing storm, climbing XI,11. Ines continued. Some good gear in the wall below the roof. Breathe. As she pulled over the roof the wind was increasing in strength, physically pushing her from side to side, easily gusting 80mph if not more.

I thought about closing my eyes as she linked the off-balance moves on the steep headwall, at one point losing a placement and dropping straight-armed onto one remaining tool. It held. I kept my eyes open. She continued. Ali and I looked at each other and burst out laughing at the ridiculousness of what we were witnessing. A seemingly endless series of loooong powerful reaches, flagging feet and skittery tools. Several times she completely disappeared into the growing maelstrom. Then the whoop. The very, very loud and joyous whoop. It was over. Ali and I started breathing again. Nadir stopped filming. We struggled downhill, trying often in vain to keep our balance in the storm. Later, sitting in the cafe, we explained to Ines what a "hoolie" was.