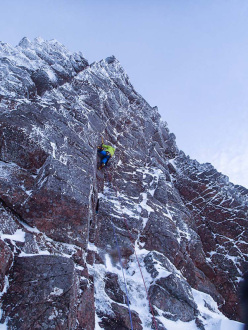 Climbing together with Masa Sakano, Greg Boswell has made the first ascent of Banana Wall at Coire an Lochain. Graded XII,12, this is only the second winter route of this difficulty in Scotland.

Just when it seemed as if Greg Boswell’s winter season couldn’t get any better - during an extraordinary fortnight last month he an unprecedented run of three Scottish grade X onsights - the 24-year-old Scotsman has now raised the bar once again with the first ascent of Banana Wall. Graded XII,12, this is only the second winter route of this difficulty in Scotland, after Anubis on Ben Nevis climbed by Dave MacLeod in 2010

Banana Wall tackles a steeply overhanging line at Coire an Lochain in the Northern Corries, eyed up by various climbers in the past including Germany’s Ines Papert who in 2011 wisely opted to climb slightly further to the right to establish her Bavarinthia IX/9.

Boswell first attempted the line in December 2013 but soon backed off, while another attempt earlier this season resulted in a second retreat. Seeing that he had time on his side Boswell took the unprecedented decision to abseil down the route to check out the gear placements. Scotland is famous for its very strict winter climbing ethics and Boswell explained "I never thought I would do this on a winter line, as the Scottish ethics are very much in favour of the "Ground Up" approach. But I laid out some very stern rules in my head and decided that if I wanted the sport to keep progressing, then maybe this is not such a bad idea. I really wanted to climb this route but didn’t want to go into unchartered territory that was so overhanging and end up getting hurt."

The abseil confirmed Boswell’s initial thoughts - the route was steep, looked amazing and feasible - and inspired by Papert's recent repeat of The Hurting he returned last Wendensday with Masa Sakano to try the route again. After a tremendous battle to about 2/3 height Boswell took a spectacular ten-metre fall that was stopped by his thin wires. He lowered down to the ground to rest, pulled the ropes leaving the gear in-situ, then summoned up the courage and powered his way to the top to produce what he believes is his hardest yet. Boswell told planetmountain.com he is highly motivated to try Anubis, too, but as always this depends on conditions which, at present, are far from ideal with a current thaw period that looks likely to bring the Scottish winter season to an end.