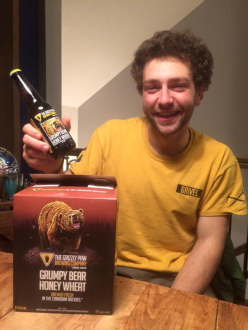 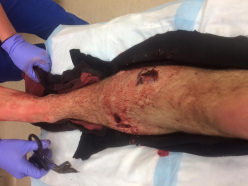 Scotland's Greg Boswell was attacked by a bear yesterday while winter climbing in the Rocky Mountains in Canada together with Nick Bullock. The two leading British alpinists thankfully survived the attack without serious injury.

Greg Boswell, one of Scotland’s leading winter climbers, has survived an attack by a grizzly bear in the Canadian Rockies. Boswell was climbing together with English partner Nick Bullock and the two were negotiating the difficult approach to Dirty Love, an unrepeated 500m M7 alpine outing put up by Jon Walsh, Audrey Gariepy and Raphael Slawinski in 2008 on Mt Wilson, when a bear appeared out of the forest.

Writing on his blog, Bullock explained "Greg was behind. "Bear, aaaaaaargh." I spun to watch Greg sprint past me and in hot pursuit was a Grizzly. The bear bounded, pulling and pushing the snow with powerful legs. The snow lapped its belly and didn’t appear to slow it."

Boswell ran out of sight and was attacked by the bear when he fell. "Greg fell on his back and watched the monster closing. It jumped. Screaming and shouting, Greg kicked at Ursus arctos horribilis and it bit straight though his brand new boot as if it were a carpet slipper. It lunged once more and crunched into his shin, placing a paw on his other leg before lifting him off the ground. I’m not sure at this point what other people would do, but Boswell is Boswell and the bear just didn’t appreciate this, he grabbed the bear’s mouth and prized apart the jaws, pushing, and screaming… "

Boswell managed to frighten the bear off and he and Bullock then made the extremely nerve-wracking, three hour descent to the car. Bullock then drove for two hours to take Boswell to hospital and after reaching stitches the Scot is now on the road to recovery.

Yesterday’s terrifying attack has, unsurprisingly, hit mainstream news and commenting after the incident Boswell stated "OK. It’s 3:51 am in Canada. My phone won't stop ringing and the emails are flooding in asking for info. The only thing I'm gunna say is that, despite me actually getting bitten, it was both Nick and I that were attacked. It was just as terrifying for him as it was for me. I literally owe my life to Nick. I was in shock after the incident and didn't know what to do. Nick got me out of there and drove me to the hospital! It wasn't a one man mission to stay alive like the media is portraying, it was a friend doing as much as he could in a crazy situation to keep his friend from dying! I probably would have died of hypothermia or blood loss if he hadn't kept me going. My stupid idea was to climb a tree and wait until daylight. 12 hours in -20'c and with some serious bleeding to my lower leg is not the best way to spend the night. I can't thank Nick enough, even though I know I don't have to. Cheers bro! Xx"