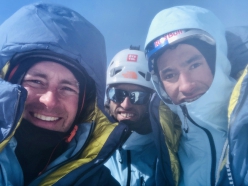 It's a year to the day that Hansjörg Auer, David Lama and Jess Roskelley were killed in a climbing accident on Howse Peak in Canada.

Precisely a year has passed since Hansjörg Auer, David Lama and Jess Roskelley perished in an avalanche on Howse Peak in Canada. They were descending the mountain after having established a variation to M-16, an awe-inspiring line climbed only once before, twenty years previously, by Scott Backes, Barry Blanchard and Steve House.

The loss of three of the world’s premier alpinists in the same climbing accident on 16 April 2019 - and the harrowing search and rescue days that followed - shocked the entire climbing community to the bone and the after waves have been felt ever since. Not a day passes without someone somewhere being reminded of one of them. Of one of their many astounding climbs that, for them, were so normal. Of their smiles. Of their innate talent.

Auer’s free solo of the Fish Route on Marmolada in the Italian Dolomites and his solo ascent of Lupghar Sar West in Pakistan; Lama’s first free ascent of the Compressor Route on Cerro Torre in Patagonia just five years after being crowned European Bouldering Champion and his solo of Lunag Ri in Nepal; Roskelley’s ascent of Everest aged just 20 and the formidable South Ridge of Mount Huntington in Alaska.

These are just a handful of examples that came about thanks to their unrelenting drive to push that talent to the uncompromising extreme, knowing full-well the consequences of this pursuit for perfection. Families and friends, and the mountaineering community as a whole, lost all three precisely a year ago. And yet in many respects it feels like only yesterday.

Patti Smith - Because The Night

29.04.2019
Hansjörg Auer: his climbing, his alpinism and the Marmolada Fish route
Video interview dating back to 2008 with Austrian mountaineer Hansjörg Auer, a year after his extraordinary free solo ascent of Via del Pesce, aka The Fish, up the South Face of Marmolada in the Dolomites carried out on 29 April 2007.