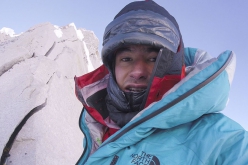 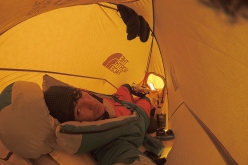 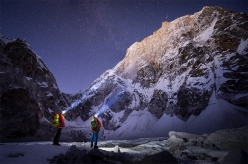 Interview with David Lama after his October 2018 solo first ascent of Lunag Ri, the 6907m mountain on the border between Nepal and Tibet.

As reported previously, on 25 October 2018 Austrian mountaineer David Lama pulled off what can only be regarded as a remarkable solo first ascent of Lunag Ri, the 6907m peak that straddles the border between Nepal and Tibet. Lama set off from base camp on 23 October and, after two cold bivouacs, summited at around 10.00 am before swiftly descending and waiting for the cold of night to freeze the face and return safely to Base Camp. Success came about after two previous attempts, the first in 2015 when with America's Conrad Anker he climbed 300 meters shy of the summit, the second in 2016 to within 250 meters of the summit, solo, after Anker’s dramatic stroke and immediate airlift to Kathmandu where he underwent surgery. Lama described the three days climbing Lunag Ri alone as "some of the most intense" he has spent on a mountain and the importance of this summit success for the 28-year-old should not be underestimated.


Yes, it was a pretty cool climb. I’m happy.

On the summit it looked like you were crying tears of joy
Well actually I wasn’t crying because I was happy. My eyes are teary because I’d been climbing in the shade all the way up to those final meters, so I hadn’t been wearing sunglasses. Also, the wind was really strong and that’s why my eyes teared. So no, they’re not tears of joy, but I was definitely very pleased to be on the summit. I also knew though that I wanted to descend as quickly as possible.

This was your third attempt at the mountain. Can you briefly explain how things went?
I used a similar strategy to the one I'd used during my solo attempt in 2016, with a first bivouac at circa 6400 meters. I set off from Base Camp shortly after midnight on 23 October and started climbing through the night. The lower section of the route is wildly exposed to rockfall when it’s in the sun, that’s why I wanted to get through it in the still of night. Things went a lot better than expected and I reached the bivy shortly after dawn, and then spent the rest of the day there.

Better than expected, why do you say that?
There’s not much snow on the mountain this year and so I reckoned I’d have to climb through a lot of mixed terrain. Despite the darkness I managed to get past these sections fairly quickly, thanks also to what I remembered from my previous attempts in 2016 and 2015.

How long did you stay at the bivy?
I rested all day in my tent and planned to continue climbing at 5:00 am the next morning. I’d set my alarm for 4:00 am, but when I woke up the wind was simply too strong. So I waited for another hour. I’d received a forecast from Karl Gabl saying that the wind would be in the region of 80 km/h on my first day, then between 40-60 km/h the following days and that it would die down a bit later during the day, so I decided to postpone my departure until 6:00 am. I reckoned that way I’d be in the sun sooner. At -30°C the climbing is simply really, really cold.

How did the day unfold?
The cold was definitely a problem, but I kept climbing all day long and eventually reached my previous highpoint, where I’d turned around two years previously. I pushed on to about 6800 meters, where I then bivouacked for a second time.

And summited the next day
Yes. I climbed the virgin headwall and reached the summit at about 10:00 am and then quickly abseiled back down to my second bivouac before continueing on down. In the afternoon I reached the point where I’d spent the first night and pitched my tent again and rested while the sun left the face. I then descended through the darkness and returned to Base Camp at around midnight.

Put like that, it sounds almost easy…
Well you know how it is with big projects. When everything slips into place perfectly, it feels almost easy. And on the contrary, when you fail everything feels really hard, because you’ve gone so close to your limit. The ascent didn’t feel as hard as in 2016, but in truth it’s difficult to compare, because the two climbs were just so different. The big difference is that 2016 I hadn’t planned to climb alone. Conrad suffered a stroke and was airlifted to hospital early on, and when I eventually decided to try the mountain alone, my mind wasn’t as prepared as it was now. To answer your question, this year the climb was more pleasurable. But it certainly wasn’t simple.

What was the hardest bit?
Dealing with the cold was difficult. The window of good weather that had initially been predicted kept shifting day by day, and although I’d already packed my rucksack, I kept postponing my departure. In the end I had to try my luck with the last chance I had left. Conditions were anything from ideal and climbing in that cold was demanding, especially on the last day. Some of the mixed sections were technically quite tricky and climbing those with cold toes wasn’t the best.

What about the headwall?
That was also not easy. I was climbing into unknown terrain, no one had ever been there before. It wasn’t entirely clear which line would lead to the summit. But as I said, what concerned me most was the extreme cold.

The final meters to the summit look pretty exposed…
Perhaps they look more spectacular from the drone’s perspective than they actually were. I never considered not climbing to the edge, especially since I’d climbed sections lower down that felt far more exposed. Those final meters are straightforward terrain for me.

How do you judge this ascent?
You guys know me, I’m not one who likes shouting out huge superlatives, and placing this climb in context with my other ascents is difficult since all my previous climbs feel so different. Cerro Torre was certainly important, what with the entire bolts affair and the fact that I really wanted to climb it free. Likewise Lunag Ri was really important, because I wanted to reach the summit and because of what happened with Conrad. Comparing them seems impossible and also unfair. Having said that, my gut feeling is that this was a big ascent for me, and the completion means a lot to me personally.

You climbed this solo. Did you ever consider climbing it with anyone else other than Conrad?
I did think about it briefly, but for me the question wasn't about whether it was possibile to climb Lunag Ri, but about how I wanted to climb it. Climbing the mountain with a different partner would have been easier, but I also knew from my 2016 attempt that with a bit of luck and the right conditions I was capable of climbing it alone. When Conrad told me he definitely wouldn’t try the mountain again, instead of replacing him with someone else I decided to go alone. A few years back Conrad and I had started the project together, and I thought this was the most beautiful way of completing it now.