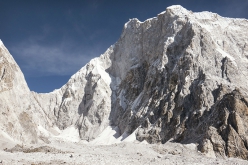 Lunag Ri on the border between Nepal and Tibet. Attempted in 2015 and 2016 by David Lama and Conrad Anker, it was climbed solo by Lama in 2018
Photo by Red Bull Content Pool

David Lama has made a solo ascent of Lunag Ri, the 6907m high mountain on border between Nepal and Tibet attempted twice before by the Austrian alpinist.

At present there is little to go by, but the all-important detail has been confirmed: David Lama has made a solitary ascent of Lunag Ri in Himalaya and has descended safe and sound to base camp. Lunag Ri is the beautiful 6000er located on the border between Nepal and Tibet, attempted twice previously by the Austrian, whose 6,812m lower summit was reached in 2010 by a French team comprised of Max Belleville, Mathieu Detrie, Mathieu Maynadier and Seb Ratel.

Lama’s first attempt dates back to 2015 when he teamed up with America’s Conrad Anker to climb the comoplex West Ridge, only to abandon the attempt circa 300 meters from the summit. In 2016 the duo returned but as is widely documented, at 5800m 54-year-old Anker had a stroke and was immediately airlifted to Kathmandu before undergoing surgery. Three days later Lama made his solo bid, but after two bivouacs he turned around once more, this time 250m shy of the summit.

Lama has now completed his project, via the line he attempted in the past on the Nepalese side of the mountain. Details will emerge in due course, but it seems superfluous to underline the importance of this success and the class off the Austrian who has confirmed - once again - that he is one of the world’s premier alpinists.

Published below is a video of previous attempts.