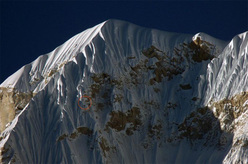 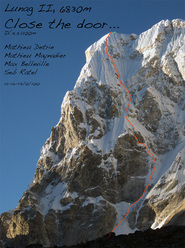 At the end of October a four-man French team comprised of Max Belleville, Mathieu Detrie, Mathieu Maynadier, and Seb Ratel carried out the first ascent of Lunag II (6830m) Nepal.

Starting out on October 24 the team climbed the SE Face to establish Close the Door (IV.5.5 1200m) in a three day push, bivying at 5800m and 6200m and reaching the summit after negotiating some exposed ice flutes late in the day at 10.00 pm. After a night spent just beneath the summit they descended and reached Basecamp 22 abseils later.

Prior to Lunag II, the Frenchmen had acclimatised by attempting the N Face of Jobo Lecoultre (6478m) but turned back after 800m of climbing.

The Lunag massif in Nepal's Khumbu region caught climber's attention after the late Joseph Puryear and David Gottlieb carried out the first ascent of the South Face of Jobo Rinjang (6778m). In that spring of 2009 we stated: "We're certain that the stunning new route by Puryear and Gottlieb is destined to spark increased interest in the Lunag massif." A year and a half later here's the first ascent of Lunag II. Stay tuned...