Hansjörg Auer, David Lama and Jess Roskelley. Their bodies were recovered on Sunday 21 April 2019 after being caught by an avalanche on Howse Peak in Canada the previous week.
Photo by archive Auer, Lama, Roskelley 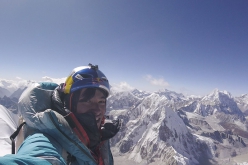 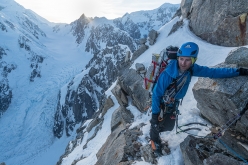 On Sunday 21 April 2019 the bodies of mountaineers Hansjörg Auer, David Lama and Jess Roskelley were recovered after being caught by an avalanche on Howse Peak in Canada last week. We publish the press release of Parks Canada and also the farewells of the respective families.

On Sunday 21 April the bodies of the Austrian alpinists Hansjörg Auer, 35, David Lama, 28, and that of the American Jess Roskelley , 36, were recovered. The three mountaineers had disappeared last week after being hit by an avalanche while climbing the East Face of Howse Peak in Canada.

The recovery was announced by the government agency Parks Canada, which explained in yesterday's press conference that the bodies of the three mountaineers were located on Sunday morning by an avalanche rescue dog on a snow slope at the bottom of the East Face of Howse Peak.

According to Parks Canada, based on a photo taken by the trio the three successfully climbed the East Face shortly after midday on April 16th. This was confirmed by the father of Jess Roskelley, acclaimed US alpinist John Roskelley. The tragic accident is believed to have occurred during the descent therefore. According to Brian Webster, Parks Canada visitor safety manager, it is unclear which route the mountaineers chose to ascend and at what point during the descent the accident took place.

According to Shelley Humphries, Parks Canada incident commander, the rescue operations were rendered even more complex by the bad weather that prevented them from flying on both Thursday and Friday, and from the high risk of further avalanches. Only on Saturday morning were conditions sufficiently safe to start the search for bodies. This was initially carried out using avalanche probes, while on Sunday morning an avalanche dog and handler were deployed by helicopter and the bodies were located. 28 people were involved in the complex research operation.

"On Wednesday, April 17, a party of three mountaineers attempting the east face of Howse Peak in the Icefields Parkway were reported overdue. Parks Canada responded immediately. Based on an initial assessment of the scene it was concluded that all three members of the party were deceased.

On Sunday, April 21, the bodies of all three climbers were recovered. Parks Canada extends our sincere condolences to their families, friends and loved ones. We would also like to acknowledge the impact that this has had on the tight‐knit, local and international climbing communities. Our thoughts are with families, friends and all those who have been affected by this tragic incident.

Parks Canada thanks our first responders and all assisting agencies for their invaluable support and professionalism including our Visitor Safety Specialists and the entire Incident Command team, Lake Louise RCMP, Lake Louise Fire Department, Bow Valley Victim Services and the skilled pilots from Alpine Helicopters."

Published below are the farewell messages of the families of the deceased.

“Mountains help me navigate what is most important to me. They balance the chaos that is regular life. Balance is what I strive to accomplish in climbing - a balance of life, love and mountains. Alpine climbing is a life-long commitment. I live and breathe it.” - Jess Roskelley • The response we’ve received from the climbing community and the myriad of family, friends, acquaintances and The North Face team has been unbelievable. Our deepest condolences go out to the families of David Lama and Hansjörg Auer. Jess looked up to the two of them and was so excited to climb with them. • “By endurance, we conquer.” • Love Alli, John, Joyce, Jordan and Dawn Roskelley

"Climbing and mountaineering on the borderline of possible is a game – a risky game… but one that I cannot live without. The game is simple, the rules always the same. The present moment counts for everything. I want to do things that push me. With all my heart or not at all. The more intense it is, the more enriching it is, and the stronger the feeling that I am heading in the right direction. I do however begin to ponder. Especially when I am injured or after a close call. I think about my friends. I think about what it would be like if one day I didn’t return, if I had to pay the price for the mountains. And yet I cannot resist to take on the challenge time after time. I will never stop searching because what I find fascinates me every time I head out.“ Thank you to all for your kind words. Our thoughts are with the families and friends of David and Jess. Family and Friends of Hansjörg. • "Klettern und Bergsteigen im Grenzbereich ist kein Spiel ohne Risiko – aber eines ohne das ich nicht leben kann. Das Spiel ist relativ einfach, die Regeln sind immer die gleichen. Das einzige was zählt ist der Moment. Ich will etwas tun, das mich fordert. Ganz oder gar nicht. Je intensiver, umso mehr bekomme ich retour und umso mehr spüre ich, dass ich auf dem richtigen Weg bin. Aber manchmal beginne ich dann doch nachzudenken. Besonders wenn ich verletzt bin oder wenn es wieder einmal knapp hergegangen ist. Ich denke an meine Freunde, Ich denke daran wie es wäre, wenn ich einmal nicht mehr zurück käme, wenn ich den Preis für die Berge bezahlen müsste. Und doch kann ich es dann nicht lassen, mich der Herausforderung das eine ums andere Mal zu stellen. Ich werde nie aufhören zu suchen, weil das was ich finde mich jedes Mal aufs Neue fasziniert.“ Vielen Dank für die vielen positiven Worte. Unsere Gedanken sind bei den Familien und Freunden von David und Jess. Familie und Freunde von Hansjörg. ▲ Thoughts by Hansjörg Auer - 2015 • Gedanken von Hansjörg Auer aus dem Jahr 2015