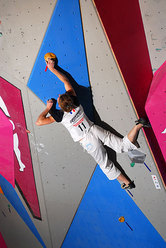 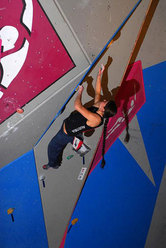 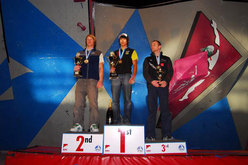 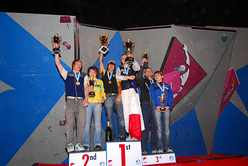 David Lama from Austria and Juliette Danion from France have won the European Bouldering Championship 2007, held in Birmingham (UK) last weekend. This is Lama's second big title: in 2006 he was crowned European Difficulty Champion.

That David Lama is a phenomenal climber is certainly nothing new to anyone. Since his debut in senior competitions the 16 year old Austro-Nepalese has revolutionised simply everything: in 2006 he overturned all previous parameters and reference points by winning 3 World Cup difficulty competitions, placing second overall in the WC and winning the European Difficulty Championship. Not content, he also happened to win the only World Cup Bouldering stage he competed in. That was last year. This year his European Difficulty title is joined by the European Bouldering accolade: an almost unthinkable feat just a few years back.

Once upon a time there were two distinct disciplines, bouldering and difficulty. It was a period marked by the strong conviction that a win in the short and intense bouldering game was incompatible with the long and difficult Lead competition. Once upon a time. Lama has proved otherwise, and his win in Birmingham last weekend proves that all rules are there to be broken. Can this be put down to his extraordinary class, or is it a sign of a more general underlying transformation? Let's leave this question unanswered for the time being and examine the facts in Birmingham.

Lama won with an almost record-breaking performance. After the Qualification - provisional 3rd with 4 tops in 7 attempts, just behind Daniel Dulac and Nalle Hukkataival and the only athlete to top out on boulder n.4 - the Austrian took overall control in the Semifinal by sending all problems in 6 attempts. He was followed int the final by the 20 yeaor old Russian surprise Dmitry Sharafutdinov, the ageless World Boudlering Champion Salavat Rakhmetov, the World Difficulty Champion TomÃ¡s MrÃ¡zek from the Czech Republic, the 30 year old French specialist Stephane Julien and the Finnish phenominum Nalle Hukkataival (winner of the Rock Master bouldering contest in 2006). 7th and therefore first excluded from the final was young Gabriele Moroni who had surely hoped to improve on his third place in the 2004 European bouldering Championship.

The final round was a nail-biting battle between unleashed Lama and indomitable Hukkataival, which went right to the last boulder and was won by the Austrian with an incredible 4 tops, three of which first go! Hukkataival left little room for Lama and sent all 4 boulders, too, but he needed 10 attempts as compared to Lama's 8. Last-out Lama had to send the last problem to win the title and he did so in the dying seconds of the competition, on his fifth attempt. Tomasz Mrazek placed third (2 tops in 2 attempts), Sharafutdinov placed 4th (2 tops in 5 attempts), Rakhmetov 5th (1 top in 1 attempt) and Julien 6th (1 top in 4 attempts).

The women's competition was certainly more of a see-saw ride, with Juliette Danion starting off "slowly", as if wanting to hold all in store for the Final. After an "easy" first round 6 women led the field with an incredible 6 tops first go: Abramchuk, Ansade, Sabine Bacher, Bezhko, Gros and Tarasova. Things changed somewhat in the Semifinal and Sabine Bacher from Austria unexpectedly rushed into provisional first with 4 tops in just 5 attempts, ahead of Olga Shalagina, Bezhko, Danion, Gros and Tarasova.

In the Final Juliette Danion was the only athlete capable of topping out on all four problems (in 12 attempts) and this netted her the European title, ahead of the World Bouldering Champion Olga Shalaghina from the Ukraine, who placed second with three tops. Third place was split by a hair's breadth: Olga Bezhko from the Ukraine and Natalija Gros from Slovenia were both, incredibly, tied with 2 tops in 2 attempts and 3 zones in 3 attempts. A single attempt less in the Semifinal cost Gros dearly and netted Bezhko bronze.


Big names were missing in the final and the top positions, such as Olga Bibik (10th) and Kilian Fischhuber (23rd), detainees of 1st and 2nd place in last year's Bouldering World Cup. Jerome Meyer, winner in 2006, was absent. And it's difficult not to note other super athletes and bouldering specialists, such Daniel Dulac who placed 12th, and ex-World Champions Mauro Calibani (11th) and Christian Core (16th). Perhaps things really are changing up front?

Before jumping to conclusions it's worth considering that this is only the beginning and the season has yet to kick off. But the strong impression, as mentioned earlier, is that something is really evolving. And that, as Mauro Calibani said "in bouldering, just like in lead, the top 30 are all in there for the final 6 positions and there are at least 10 athletes that can win." Excluding phenomena like Lama who, according to Calibani is someone who "plays with climbing." The adventure and bouldering game is getting harder and harder and increasingly absorbing and "uncertain."

The next Bouldering competition takes place in Erlangen (GER) on 30-31 March with the first stage of the Bouldering World Cup 2007.