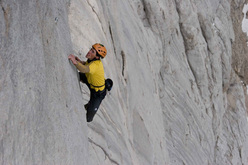 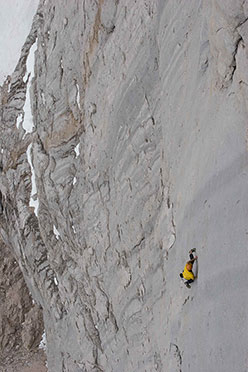 Hansjörg Auer soloing the Fish route, Marmolada, 2007. The photo was taken by Wilhelm a week after Auer's solo; he was lowered to the 19th pitch by his brother Matthias
Photo by Heiko Wilhelm 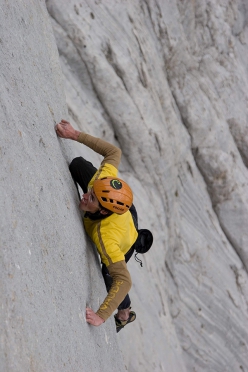 Hansjörg Auer free solo climbing the Fish route, Marmolada, 2007. A week after his ropeless ascent the Austrian returned with his brother Matthias and the photographer Heiko Wilhelm to shoot this photo.
Photo by Heiko Wilhelm 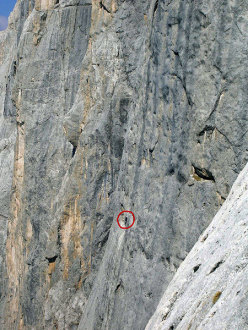 The historic photo of Hansjörg Auer making his free solo ascent of Attraverso il Pesce - Fish route up the Marmolada, Dolomites. The photo was taken on 29/04/2007 by Heinz Zander from the nearby climb Don Quixote
Photo by Heinz Zander

Hansjörg Auer: his climbing, his alpinism and the Marmolada Fish route

Video interview dating back to 2008 with Austrian mountaineer Hansjörg Auer, a year after his extraordinary free solo ascent of Via del Pesce, aka The Fish, up the South Face of Marmolada in the Dolomites carried out on 29 April 2007.

April 2008. Trento Film Festival. This is what Hansjörg Auer told us about his incredible free solo climb of Via Attraverso il Pesce, more commonly referred to as The Fish Route, up the South Face of Marmolada in the Italian Dolomites. 11 years have passed since that video. Since that day in Trento Hansjörg obviously carried out many other important climbs, and we met and interviewed him on numerous other occasions. But perhaps nothing surpasses what we felt back then, while listing to this young man as told us about himself, his mountaineering and his dreams. Nothing needs adding, neither back then, nor now.

14.08.2009
Dolomites climbing: Hansjörg Auer frees Silberschrei on Sass de la Crusc and on-sights La Cattedrale in Marmolada together with Much Mayr
An intense couple of months for Hansjörg Auer: together with Thomas Schreiber he recently carried out the first ascent of Silberschrei on Sass de la Crusc in the Dolomites, before a lightening fast trip to England with Much Mayr which resulted in a fast ascent of Gaia. The two then on-sighted La Cattedrale on the Marmolada in the Dolomites.