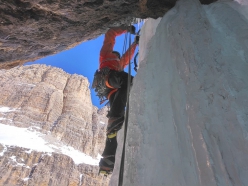 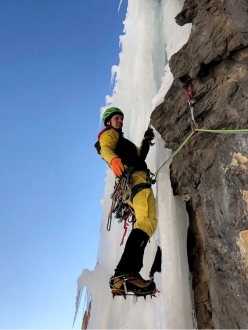 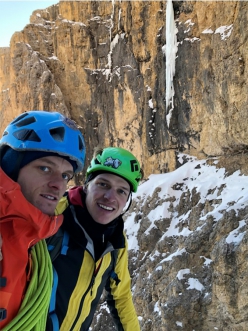 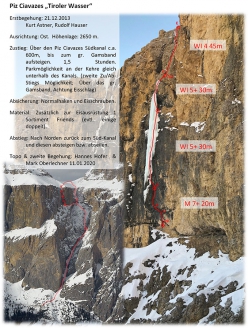 Tiroler Wasser on Piz Ciavazes in the Dolomites. The ice climb was first ascended by Kurt Astner and Rudolf Hauser in 2013
Photo by archivio Hannes Hofer

Hannes Hofer reports about the repeat carried out on 11 January 2020 with Mark Oberlechner of Tiroler Wasser, Acqua Tirolese, a mixed climb up Piz Ciavazes (Sella, Dolomites) established in 2013 by Kurt Astner and Rudolf Hauser.

While descending from legendary Solo per un’altro Hashtag I noticed the beautiful line of ice that had come into condition in the mighty gully on the righ-thand side Piz Ciavazes. When I told Magge (Mark Oberlechner) about it he immediately convinced me to try it as soon as possible. We reckoned this line, which rarely forms, had not yet been climbed before.

Two days later we stood at the base of the gully and had to put on our crampons almost immediately, a mere 100 meters from the car. Ready for a north facing route, we set off for the next hour and a half to reach the icefall on the huge half-height Cengia dei Camosci ledge.

The start of the route was obvious, Magge cleverly managed to make his way up past an overhanging crack, resorting to some aid climbing and hanging off a cliffhook to place two pegs. Completely pumped I joined him at the belay and after a short rest started up the next pitch which led to steep ice. The higher I got the more the ice was plastered to the wall, and soon I managed to place a good ice screw. After 30m though I was overjoyed to reach a belay, because I was well pumped once again.

We’d now reached a free standing drip that didn’t exactly ooze confidence, but this was probably the last hurdle that separated us from the summit. Magge managed to place a good cam two meters above the belay and then dared to move across onto the ice. Once again the noise that the drip made when Magge placed his axes into the ice wasn’t inspiring, nonetheless he solved this section with extreme caution and was rewarded 20 meters later with a great thread.

The last pitch provided pleasurable climbing on compact ice. The thought of having established a new route also made us happy, since we had’t come across any signs of previous ascents.

Two weeks after our climb though we discovered that this wonderful line had already been climbed before, by Kurt Astner and Rudolf Hauser in 2013. Over the years we have repeatedly realised that the attribute "first ascent" must be used with caution, especially when it comes to something as ephemeral as ice. Our predecessors, the pioneers of the Dolomites, achieved superhuman things back in their days. For them, mountain climbing was probably nothing more than a real adventure, having something published or becoming famous was secondary.

This spectacular mixed climb, with its demanding approach and descent into the steep Piz Ciavazes gully, was an incredible adventure for us and it is certainly worth repeating.

29.01.2003
Kurt Astner flashes Mission Impossible in Valsavarenche
On 27 January Kurt Astner flashed Mauro Bubu Bole's Mission Impossible next to the Haston cave, Valsavarenche, Va di Cogne, Italy.
21.04.1999
First winter ascent of Via Barbier by Christoph Hainz and Kurt Astner
In January the Pustertal alpinists Christoph Hainz and Kurt Astner scored a real coup by making, in two attempts, the first winter ascent of Via Barbier up the North Face of Cima Grande di Lavaredo. This difficult climb was established in summer 1989 by the Czech brothers Miroslav Coubal and Michal Coubal.