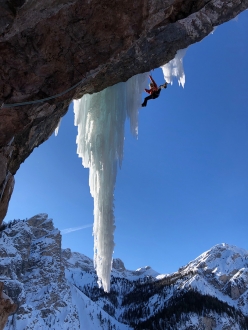 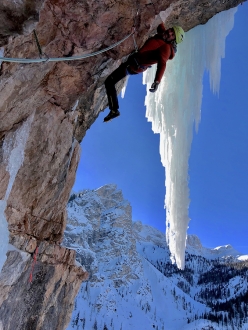 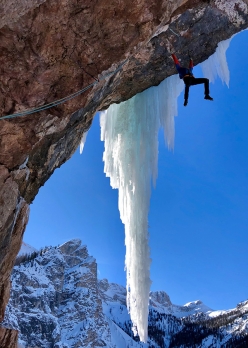 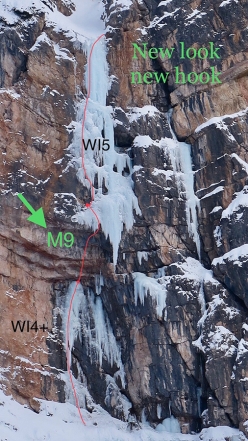 In January 2001 Oswald Santin and I climbed a new route up Rauhe Gaisl in the Pragser Tal valley. The line was obvious and we climbed it in traditional manner, i.e. only with normal pegs. After our hard work we were convinced we deserved a beer, so we called it Beer Drinking, and graded it M9. How serious and difficult the climb was became apparent over the years, seeing that only very few ice climbers dared to repeat it. From what I know, in its 16 years it was repeated only on 5 occasions.

In 2013/14 a section of the face collapsed, taking with it about 1/3 of the climb; the lower, difficult part. Even if 2/3 thirds of the upper part remained intact, the route was not included in the re-edition of the local ice climbing guidebook "Eiskletterführer Südtirol-Dolomiten", which saddened me.

Together with Kurt Astner I set off on 25 January 2018 to find out if we could forge a line through the section where the rockfall had occurred, in order to give a new life to the old route. When we got below the roof we hoped the find a suitable line that would complete the original climb. It was then however that we realised that Eiserne Jungfrau, the route put up by Simon Gietl and Vittorio Messini in 2015, shares a key section of my old route, calling it its own, and so we decided to establish something completely new to the left, a bolted route with good hooks.

We were lucky, because after a short search we found a suitable line. We were satisfied and since we didn’t have the gear to establish a bolted route we climbed - just for fun - with ski mountaineering boots the climb Spitzbart. Since I’d never climbed it before Kurt let me take the lead and much to my surprise and joy I succeeded in onsighting this beautiful climb.

A few days later we were back below the roof, this time fully equipped for the action. I noticed that Kurt almost exploded with energy and motivation, and it was clear therefore who’d climb the first pitch. Kurt bounded tirelessly up and up, over the roofs. But when he finally reached the moves that lead from the rock onto the ice, even he had to admit he was a little tired. At this point I took over. I started working the route, placing bolts and studying the sequences. After a busy but positive day we completed the line and, apart from a few small details, it was ready to be climbed. And since we were extremely motivated, we returned to the base a few days later.

After improving some holes and establishing a belay at the top, we were now ready to try and free it. This time Kurt let me climb first and I set off, thinking I’d just work the moves once ago. Much to my amazement, however, I managed to climb everything clean straight off, right up to the last big roof. There I used a little "rest" to shake my arms one last time, before following my instinct which told me that perhaps I might be able to send this M9 first go! I continued determinedly and reached the top, totally spent, but at least I’d done it first go! It had been worth the effort! Now it was Kurt’s go. He was on excellent form and climbed it free on his first attempt, effortlessly and seemingly without wasting energy! And since the climb was so beautiful, he immediately sent it again!

With our New look new hook we bade farewell to the old climb Beer drinking and have created a new, very beautiful, 3-pitch mixed climb. That eagerly awaits other ascents.