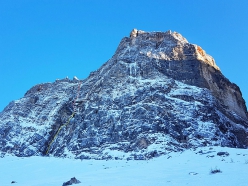 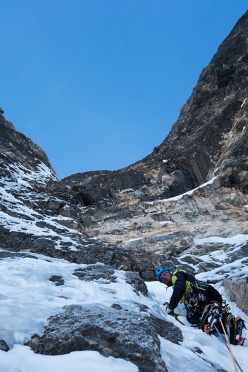 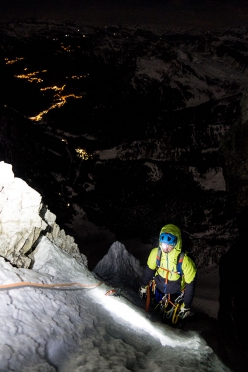 Enrico Geremia reports about the first ascent of Pelmoon up the North Face of Mt. Pelmo in the Dolomites, established over two days with his brother Daniele Geremia and Fabrizio della Rossa.

Hammered, exhausted, the only thing we now need is a few liters of beer. We reach the car and would never have expected to meet a spectator. The girl who works at Baita Flora Alpina in Val Fiorentina congratulates us and tells us that through the darkness she been watching our progress up the face. And we thought we were incognito?! happy to have received such a warm welcome we invite her for a beer, but she declines ... understandably so since it’s past 11 o'clock.

Fabrizio and I set off in search for a bar that, out of season here in the Dolomites, proves an epic undertaking. Almost like establishing a new route up the north face of Pelmo. Fortunately Silver comes to the rescue and provides ample beer, wine and sandwiches. Much to our amazement here, just like in many other places nearby as we later find out looking at facebook, we’re the "stars" of the valley: "... two head torches up on Pelmo... was that you guys?" Oh yes ... sitting here with a glass of beer in hand we have time to sit back and think: “yep, that was us!"

We had launched up an unknown line I’d noticed from Colle Santa Lucia during one of my rare moments of relax. I’d even made a quick reccie trip, but that proved useless since from inside the starting gully I couldn’t make out the rest of the line. In any case, we’d given it a go, hoping to find a way that would lead us to the obvious line of ice line on the upper section of the face. My brother Daniele Geremia and I had "more or less" agreed to start the adventure, but the “green light" came from legendary Fabrizio della Rossa.

At the start of January we set off, in our usual style: with a drill that didn’t turn unless you gave it a cuddle, 5 bolts which actually turned out to be just 3, a handful of pegs and some ice screws which we’d then place along the route, hoping it would bear fruits in the future. In short, we had nothing very much.

As usual the approach was the least fun bit of the climb but unfortunately there was no way of getting round it. After about an hour and a half we reached the base of the snowy gully, kitted up, breezed past some easy mixed sections and moved on towards the heart of the face. As soon as the view opened up our line sprung into view. We were lost for words, overjoyed that a continuous line of ice had formed. All we needed to do was reach it.

Fabrizio and Daniele established some pitches that turned out to be real gems, past very thin and precarious ice with few, random pieces of pro… unbelievable! This took a few hours and time was running out, dusk fell. We called a friend down in the valley in order to understand how high up we were, but he couldn’t see us. Evidently we were still too low. A quick glance at the photo convinced us that we were well beneath the visibile section. We had to descend. We organised the abseils and quickly made our way back down.

During the days that followed the excitement grew. We wanted to climb the upper section but due to our various work commitments (to be honest, not many during this winter season) we finally managed to find date that suited everyone: either Wednesday or Thursday.

As things turned out though, Daniele unfortunately remained "stuck" on his first ascent of Zuita Patavina, a new climb up Mt. Civetta. On Tuesday evening I realised that Daniele would never get back in time and, somewhat reluctantly, Fabrizio and I decided to set off nevertheless so as not to lose out on the good conditions. I stole a bit of gear from my trusted climbing partner Francesco de Cassan, aka Buzzi who didn’t let me return home before having drunk 3 liters of red wine

At 10 the next day we reached our previous highpoint. Finally, after having broken trail for almost 1000 meters - between the approach and initial easy pitches we’d simul climbed - we were back in the game; adventure time. Each pitch we forged was more beautiful and varied than the previous one: some mixed sections, some thin ice, a few snow mushrooms that proved difficult to breach, some solid alpine ice and some pro, here and there. We established four amazing pitches past climbing that although not particularly difficult, was psychological as the ice screws went in just as easily as they came out.

The line is split into two and unfortunately due to distraction and fatigue we made a route finding errore and took the lefthand branch that led us away from the ice. This mistake cost us time but Fabrizio made up for it with an excellent pitch that brought us back to the original line. I climbed the last pitch at dusk and when Fabrizio joined me I’d already untied and was preparing the abseils. He however spured me on to continue to the top. I thought about it briefly and realised that in any case we’d have to rap off in the dark, so it was worth pushing on. I wrote to my wife to reassure her, we drank that last drops of rea and finished up the last two easy pitches that led us to encounter the moon on the shoulder of Mt. Pelmo: absolute magic. Two pitches that, quite rightly, Fabrizio wanted to climb in order to complete the climb. Otherwise it would have been like a painting without the artist’s signature. We celebrated our amazement and satisfaction for having succeeded with a handshake and a happy hug, and this soon gave way to weariness that accompanied us throughout the long return back down to the valley floor. Nice one Fabrizio, thank you for the super climb and adventure. And thanks Baloton for for having started the waltz with us.

04.04.2012
Andamento lento, first repeat and winter ascent by Baù and Geremia
On 25-26/02/2012 Alessandro Baù and Enrico Geremia carried out the first repeat, and first winter ascent, of the route Andamento Lento in Val Scura (Dolomites), established by Gigi Dal Pozzo, Maurizio Fontana and Venturino De Bona in 1997. The report by Alessandro Baù.