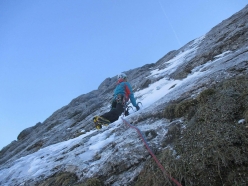 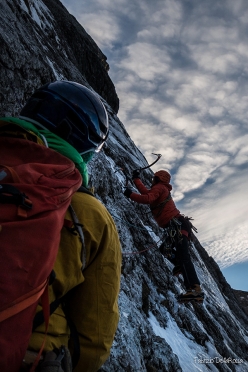 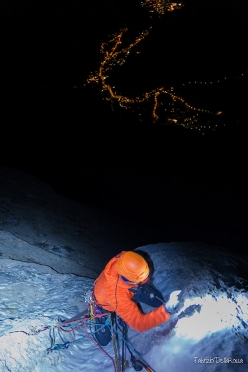 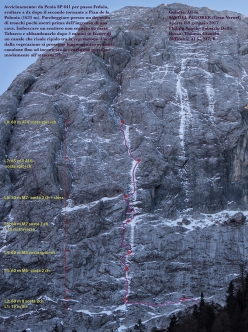 It all began with a simple phone call for the three of us to go and climb something together. Why not try that sliver of ice on Gran Vernel? Is it really possible that no one has gone ahead and tried it, even though it formed more than a month ago and lies in plain sight?

Thanks to some photos Fabrizio had taken a few days earlier of the face and a quick reccie to scope the best approach, early on 9 January we got the ball rolling and started up our new route on the north face of Sas Pegorer.

We set off from the car in the dark and walked up to the base of the wall. We soon realized that what seemed from below to me not particularly difficult would require our full commitment. After an easy start and a traverse across a snowfield we reached the base of the drip. The quality of the ice (ie frozen snow) and the rock’ compactness made placing protection and establishing the belays both difficult and laborious.

After two pitches that were not too difficult technically speaking but extremely demanding psychologically, we reached the route’s technical crux. In order to avoid climbing the long patches of thin and unprotectable ice we opted for the dry variant: first past a smooth slab at first, then diagonally up towards a corner, followed by some delicate hooking on frozen tufts of turf to exit onto an frozen snow slope towards a comfortable belay.

The next pitch breached a delicate icy slab to reach a corner on the left which, the higher you get, becomes harder and harder to protect. This was followed by the penultimate pitch: thin ice and compact snow, where ice screws serve as decoration and not much else. At the end of this pitch the time came to turn on our headlamps. The last pitch that ended just below the thin tongue of snow and ice finally offered some ‘plaisir’ climbing, nothing hard, where the entire ice pick entered the polystyrene-like snow - obviously the pro left much to be desired.

We could obviously have continued on up to the summit, but we’d achieved our main goal of climbing the line of "ice", time was almost up and so to was our gear. So at around 19.30 we begin the abseils down the line of ascent. At the base we recuperated the gear we’d stashed and descended to Canazei, where fortunately we still found somewhere to warm up and enjoy a well-deserved beer and pizza.

NOTES
The climb ascends the North Face of Sas del Pegorer, is 430m long and 350m high. Probably the line comes into condition rarely since the ice only forms when the snow that plasters the face transforms. Usually though the snow doesn’t melt in winter, unless it rains just like it did in November 2016 immediately after some heavy snowfall. The pitches are generally just off-vertical and offer highly technical climbing with long sections up rock. The route is characterized by its lack of decent gear; the ice is too thin for ice screws, while the rock rarely provides cracks for pegs or trad gear. During the first ascent 3 bolts were placed by hand on 3 different belays. The first ascentionists are completely happy with more bolts being added by those wishing to repeat the line, as they do not believe in a heroic, kamikaze form of alpinism! Bearing in mind th type of ice, the first ascentionsists suggest using the Alpine Ice climbing scale and suggest AI 6-, M7, R for the 8 pitch outing. All rappel belays are equipped.