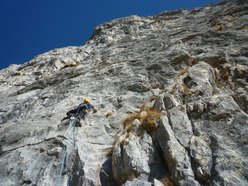 On 25-26/02/2012 Alessandro Baù and Enrico Geremia carried out the first repeat, and first winter ascent, of Andamento Lento in Val Scura (Dolomites).
Photo by Alessandro Baù 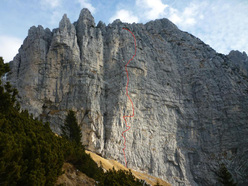 On 25-26/02/2012 Alessandro Baù and Enrico Geremia carried out the first repeat, and first winter ascent, of the route Andamento Lento in Val Scura (Dolomites), established by Gigi Dal Pozzo, Maurizio Fontana and Venturino De Bona in 1997. The report by Alessandro Baù.

When you stumble across the names Dal Pozzo, De Bona and Fontana, you know its a hallmark, that the route is worth climbing and that you're guaranteed to have fun! I've repeated a number of their routes over the last few years: all take surprisingly logical lines up compact rock faces with difficulties and grades which are never particularly generous.

Andamento Lento lived up to our expectations: Val Scura is reached by an intense two-hour approach and the smooth, 400m high south-facing wall is a magnificent place for mid-seasons. I'd wanted to repeat this route for a while; a few years ago Alessio Roverato and I made our way up to the base of the climb and only then did we realise that we'd forgotten our Friends in the car. In a moment of madness we decided to give it a go nevertheless, but at the end of the first pitch we came to our senses.

And so here I was, at the base once again with Enrico Geremia (Balotin). Not knowing what the conditions would be like we left Padova armed to the teeth for a full-blown winter ascent but once we parked the car and inspected the valley we wisely decided to abandon our winter boots and snowshoes to enjoy the walk in nigh-summer conditions. Since I remembered how demanding the first pitch was we set off without a rush, in the mid-morning sun. We planned to bivy on the route and finish it off the next day but the "large ledge" indicated in the route topo turned out to be not much more than a very uncomfortable seat. The day passed by quickly and at the end of the sixth ptich and after various traverses we realised that we were a mere 120m off the deck. And so there we abseiled off, down onto the meadow once again, for a spectacular bivy; we'd given the haulbag a free ride up the route, if only we'd thought about it beforehand... We woke up the next morning accompanied by a cold northerly wind and completed the route which proved demanding, even on the "easy" grade VI finishing pitches. A great route, climbed in good company during a spectacular weekend. Congratulations to the first ascentionists for their insatiable desire. In short: highly recommended.

by Alessandro Baù
Thanks to: CAMP, Scarpa, Kiwi Sport, Montura.