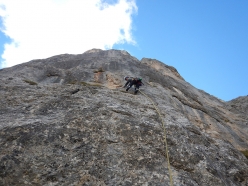 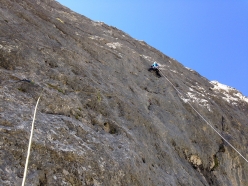 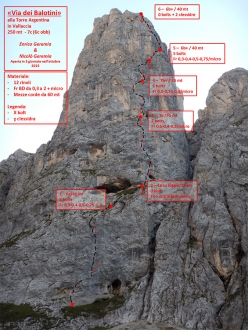 In October 2015 on Torre Argentina in the Vallaccia group (Val di Fassa, Dolomites) the brothers Enrico Geremia and Nicolò Geremia made the first ascent of 'Via dei Balotini', a new rock climb to the right of Via Maffei - Frizzera.

The idea, the desire, the time, the gear... we pretty much had all of these, all we needed now was a bit of organisation. Even our wives and girlfriends had given us the green light, which meant we had to move fast (hoping they wouldn't change their minds!). It was strange but true, we decided to head off to Vallaccia, filled with energy and burdened down by the load, because we still didn’t know what we're precisely we were heading to. And in order to not make a mistake we had decided to take everything with us.

As we walked up the valley at breakneck speed (as usual) we realized that instead of warming up, our hands began to loose sensitivity: of course, it was October ... hmm, we couldn't have chosen a better time to climb something new in the Dolomites’ renowned Vallaccia.

The sensation of the first joints of our fingers detaching from our hands before even touching the rock made us give up on any ambitious project on shady faces and so, proud about our decision, we set off up the only wall in the sun that inspired us: Torre Argentina... after less than an hour though even this face the shade ruled supreme... amazing.

This is how Via dei Balotini was climbed, a route that was established with bolts, trad gear and in the cold. The line we chose tackles sections of very compact rock thanks to the bolts, but wherever possible we opted to use trad gear, meaning that some pitches have a particularly alpine feel to them and require experience in placing trad gear.

This style enabled us to find a line up excellent rock that has, as mentioned, a distinct alpine feel with a bit of spice due to need to integrate the inset pro with trad gear. The detailed route tope provides all the info you need in order to fully enjoy the climbing with as little additional weight as possible, in particular on the crux pitches.

Thanks: in particular to Linea Verticale, Feltre, for the gear, Wild Climb and Mauro Marcolin for the climbing shoes, Patagonia, Grivel and Risk Protect