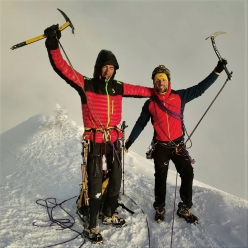 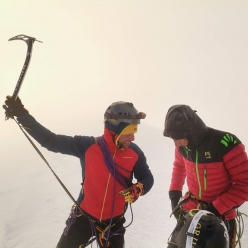 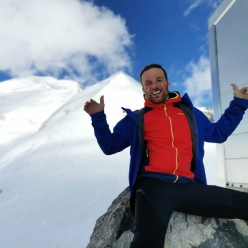 Interview with Andrea Lanfri who climbed Mont Blanc via the normal Italian route with Massimo Coda. In all likelihood they are theirs is the first paraclimbing partnership to achieve this undertaking.

At the start of August Andrea Lanfri and Massimo Coda climbed to the top of Mont Blanc. While at first glance this may not seem anything special, both alpinists are actually paraclimbers: in 2015 lost both legs and seven fingers as a result of fulminant meningococcal septicemia, while two years ago Coda lost his right leg following an accident. The duo relied only on their skills and strength to reach the summit and managed the climb on their own. Here's what 33-year-old Lanfri told planetmountain.com about their climb.

Andrea, tell us about Mont Blanc
The ascent was split up as follows: on the first day we started from Val Veny and traveled up the entire Miage glacier to the Gonella Refuge, on the second day we crossed the Dome glacier and continued up to the ridge to join the normal French route to the Vallot hut. We actually wanted to reach the summit that day but the weather wasn’t the best so we stopped and rested at the bivouac, and at 4 am the following morning we set off for the summit. At about 6.30 am we reached the summit of Mont Blanc! We then descended and returned to the Gonella hut. On the last day we descended into Val Veny back down to our car, and much to our surprise we were greeted by the editors of imountblanc Tv who are to celebrate our ascent!

Nice one! Here’s a question that’s so simple it sounds stupid: what is the most difficult thing for an mountaineer with a prosthesis like you?
Walking across rocky terrain is tough for someone who wears a prosthesis or, for those like me, who have two… it’s difficult terrain to cross. Your balance is constantly put to the test and it’s tiring, not just physically but also mentally. Not having ankles that are mobile, you need to correct your balance by moving you pelvis or upper body. And having a rucksack adds to the difficulties.

What about trudging through the snow?
Finding the right balance on snow is much easier, being on snow actually helps! However, in this case, some sections on the ridge are tricky and we had to be careful not to lose control of our prosthesis for even a split second, as a mistake would have been fatal. The most difficult thing of all is rocky terrain on the descent: the problems I mentioned before are amplified when going downhill and the descent requires excellent control of the prosthesis. Which isn’t always easy.

Let's turn the question the other way round: what’s the easiest thing?
For me it’s undoubtedly problems associated with cold feet. I don’t get them, for obvious reasons, and I don’t feel the heat! I use ultralight goretex shoes even at very low temperatures, at the moment that’s the only advantage I can think of... In reality there are no advantages for us who use prostheses, it is a continuous struggle against inflammations and cuts; prostheses are not simply a pair of shoes that you just put them on and start walking, they require a lot of sacrifice, training and a high pain tolerance.

So what now?
My dream is to climb all the Seven summits and next year we’ll start the Everest project, I’d like to become the first athlete in the world with 4 amputations to reach the top of the roof of the world. For now though, next up are 20 and 21 August for our ascent of Monviso along the east ridge, and 5 and 6 September when we hope to climb the Matterhorn via the Lion’s Ridge.