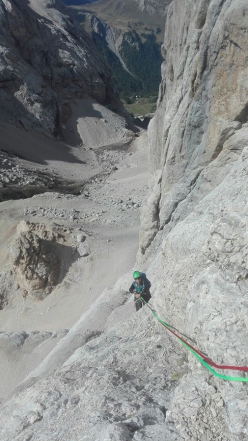 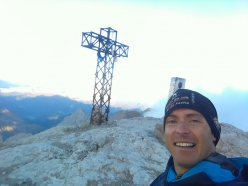 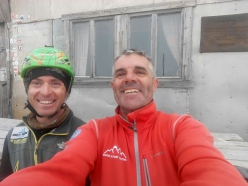 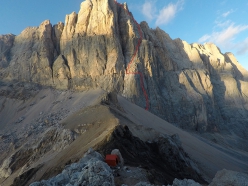 Paraclimbing: Nikolaj Niebuhr has repeated the classic Bettega - Tomasson climb up the south face of Marmolada, Dolomites. This ascent marks an important moment for the 35-year-old Dane who, following an operation for cerebral edema aged 8, has been partially paralysed in the righthand side of his body.

I’ve dreamt about climbing the Bettega - Tomasson route up the South Face of Marmolada for the last 2 years. I talked to my good friend Fabio Giongo about this 24-pitch grade V; we’d climbed Gran Vernel in 2014 and I was wondering if we could climb this together, too. He told me the climb shouldn’t be underestimated, but nevertheless he reckoned it was possible, despite my handicap.

I set off from Alba di Canazei in the afternoon on 19 September in order to spend the night at the bivouac at Passo Ombretta, to save energy for the following day.

At dawn on Thursday 20 September I met Fabio at the Ombretta pass and we went to the base of the climb, put on our harnesses, helmets and climbing shoes and started upwards. I knew full well that the first five pitches, up to the first ledge, were the hardest, after which the difficulties would ease off. And so it was!

Since I cannot use my right hand and right arm, I had to push myself upwards using my shoulder and backpack. At the ledge we briefly talked about descending, but I felt OK, we’d already climbed the crux and so we continued climbing.

The following 10 pitches were slightly easier, but not particularly, a constant mix of waving in and out of chimneys past overhanging bulges. when we reached the second ledge the last five 50-60m pitches were much easier, but I began to feel tired and the fingers on the left hand (the good one) were bleeding because I had no skin left. So I just taped them up and push on upwards! 11 hours after putting on my climbing shoes, I finally saw the cross at Punta Penia, summit!

Feeling dead tired, with aching feet and hands but nevertheless extremely satisfied, I snuggled up in my sleeping bag at the bivouac and fell asleep. The next day I I woke up and descended down the via ferrata.

Repeating the classic Bettega - Tomasson climb was one of the most challenging experiences in my life. I mean: Himalaya and Everest were tough! And as is well know, at 8000 meters you can hardly breathe. But climbing a 24-pitch route up the South Face of Marmolada, with a handicap like mine, is fare more technical and complex. And incredibly satisfying, a great route that shouldn’t be underestimated!

Nikolaj Niebuhr
I was born on the 11th May 1983 and spend my childhood on a farm outside of Tårs in Northern Jutland, Denmark. I have always been very active and have always liked sports like gymnastics, cycling or ball games. At the age of 8 I had a surgery because of a deformed blood vessel in my brain and as a result of that I am paralysed on my right arm and partly on my right leg. However, my paralysis has never stopped me from doing sports. I spend a lot of my time doing gymnastics and going swimming. After I had finished my primary education, I went to a technical school and continued with an apprenticeship as an industrial technician. In 2004 I was fully trained and received my apprentice certificate. This was also the year when my grandpa took me skiing for the first time, in the Dolomite Alps in Italy. This experience completely changed my life. From that year on I spend time there at least three times a year. In 2007 I got a job as a skiing guide. I really learned to love skiing and being out in the nature surrounded by the mountains. That is why I did the job as skiing guide for three seasons in a row. In the summer holidays, I spend my time there as well, however with the mountain bike instead of skis. Today I live in the Dolomites all year round, where I spend my free time on the mountain bike, climbing or Randonee skiing.

02.09.2015
Manolo: Weg durch den Fisch, climbing the Marmolada Fish route thirty years later
After 30 years Maurizio 'Manolo' Zanolla returns to climb Via Attraverso il Pesce, the Fish route on the Marmolada South Face in the Dolomites… and experience those (ghastly and unrepeatable) moments, those distant memories that resurface in an unexpected perspective.

12.08.2013
Invisibilis on Marmolada, the long history of a new route by Larcher and Vergoni
Rolando Larcher and Geremia Vergoni recount the birth of Invisibilis (405m, 7c+ max, 7a+ obl.), the new route established over 5 days from 2009 to 2011 up the south face of Marmolada di Ombretta (Dolomites) and freed by Vergoni on 26/06/2012 and repeated by Larcher on 11/09/2012. A route that breaches fantastic rock up an outstanding face and that recounts the evolution and a style of climbing.