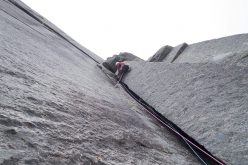 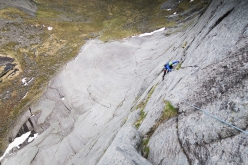 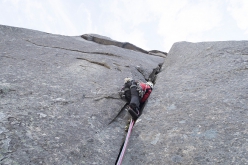 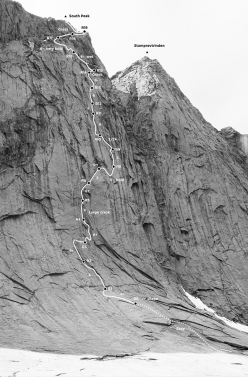 In May 2019 Bernat Bilarrassa, Gerber Cucurell and Jordi Esteve established two new rock climbs in the Kirkefjord area of the Lofoten Islands in Norway

In May 2019 Gerber Cucurell returned to the Lofoten Islands with climbing partners Jordi Esteve and Bernat Bilarrassa (Barcelona) and succesfully climbed two new routes in the Kirkefjord area. Both routes were climbed in traditional style, and no gear was left on the routes.

North Face of Moltbaertinden North Peak
Route name: Diamantfinner (400 m 7/A2)
First ascent: 24 May 2019
Descent: two rappels until the north ridge. Follow the ridge to the north and down a large gully between Moltbaertinden and Breiflogtinden.
Note: We carried some cams from #0,5 to #4 (BD size), and some stoppers. As we didn’t have micro stoppers enough we used the nut tool as protection to climb the A2 section of Diamantfinner. So, we recommend for the future ascents, to carry a lot of microstoppers.

East Face of Stamprevtinden South Peak
Route name: The Human Timeline (600 m 7/7+)
First ascent: 25 May 2019
Descent: follow the south ridge until the Helvetestinden pass and down a gully to the Kirkefjord