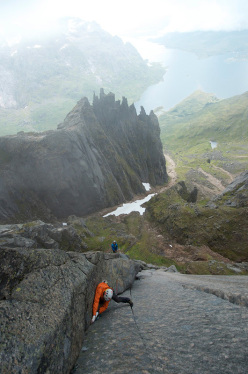 The report by Helmut Gargitter about the 2013 climbing trip to the Lofoten islands in Norway, together with Simon Kehrer, Federico Pisani, Ivan Calderon and Fernando Gonzales Rubio.

In June and August 2013 an international group comprised of Simon Kehrer and Helmut Gargitter (Italy), Federico Pisani and Ivan Calderon (Venezuela) and Fernando Gonzales Rubio (Colombia) travelled to the Lofoten Islands located in Norway's north. Countless wild, vertical rock faces still hold plenty of potential for motivated climbers in search of new routes. During the three week stay the team managed to climb two new routes and repeat some amazing classics. The weather was benevolent and the climbers took advantage of the fact that, being this far north at the time of year, means that night practically never falls.

We managed to establish a new route up the SW Face of Gaitgaljen 1085m. In 1997 an Italian group of climbers had established a new route to about 2 pitches short of the summit. In 2011 together with Pauli Trenkwalder and Renato Botte we too climbed the central section of the face to the 5th pitch but then, since we were missing a bolt, we failed to make the pendulum left to continue up the logical line. On that occasion I had to lower off a Friend. Only on this trip did we succeed in terminating the route up the steep and exposed 350m face above Austnesfjorden. I was joined by Simon, Federico, Ivan and Fernando. Our route is called "Trolls meets latinos" and offers superb climbing that varies from cracks to overhanging corners up excellent granite. The route is graded 7/7+ on the Norwegian scale that roughly equates to 7a. Only the belays have been bolted, all the pitches are "clean" and need protecting with nuts and friends. Since Gaitgaljen is one of the highest mountains on the Lofoten islands it is often covered in clouds and the cracks therefore remain wet for extended periods. We recommend therefore to wait for at least two days of good weather before repeating it.

Our second success was on the 750m high Breiflogtinden peak located at the end of Kirkefjord. This magnificent needle-shaped summit can be seen from the distant village Reine and it was first climbed a century ago via the West face. Our route, which we have called "One hundred Years later", is certainly one of the most beautiful routes on the Lofoten islands with a series of perfect cracks of all shapes and sizes that lead, after 500m, to the summit of Breitflogtinden. Apart from one pitch the entire route was climbed clean and a trad rack is therefore needed. Graded 7+ on the Norwegian scale, or 7a+, the descent can be carried out via abseil down the line of ascent.

The report of the beautiful climbing trip up North, between the sea and the rock faces on the Lofoten island, Norway. By Giovanni Zaccaria and Alice Lazzaro.