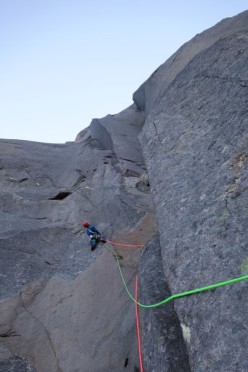 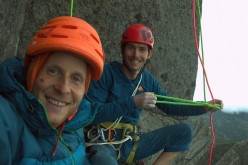 This summer Adam Pustelnik and Andreas Klarström made the first ascent of The Corner kick (8a, 900m), a difficult and dangerous new variation to the climb Freya up the Storpillaren pillar on the North Face of Vågakallen, Lofoten islands, Norway.

In August this year Poland's Adam Pustelnik and Sweden's Andreas Klarström forged a difficult and dangerous new line up the Storpillaren pillar, also known as the "Bonatti Pillar of Lofoten" and located on the north face of Vågakallen on Norway's Lofoten islands.

Named The Corner kick, the outing is an authentic 900m big wall that follows the first 13 pitches of the route Freya (Daniela Jasper, Robert Jasper 1998) to then break off left instead of continuing up the obvious corner as the Germans had done. Five new, difficult and dangerous pitches follow an incredible line of dihedrals through the steep headwall to then join up with Freya once again, before following Stormpillar (Louise Thomas, Mike Turner, 2004) and then the classic Storpillar (Arild Meyer, Kjell Skog, Tore Bjørnstad, 1980) all the way to the summit of Vågakallen.

With tricky climbing up to 8a and sparse protection, The Corner kick is to be considered a demanding outing, both physically and psychologically and, as such, should not be underestimated. The new pitches were climbed ground-up and all free during two attempts, with Pustelnik and Klarström bivying once on the free ascent - as planned with just one bivy sack but no sleeping bag - above the crux pitch and redpointing this early the next morning. Although they climbed with a bolt kit, this remained firmly in the bottom of their packs and apart from one beak at the base of pitch 16, nothing was left on the route but “blood, sweat and tears”. Pustelnik describes the ascent as “a great adventure. One of the most challenging I’ve experienced” and it heralds a superb return to form after his serious accident on Naranjo de Bulnes in Spain in 2011.


THE CORNER KICK by Adam Pustelnik

We came to Lofoten with an idea of trying to free climb one of the existing aid lines on Storpillaren (Freya, Stormpillar, Genus Locy). Accompanied by blue skies we made our first shot on Genus Locy (A2+ variation of the classic Storpillaren). We spent a long day trying the sequences on the crux pitch of this line. When we finally got all the moves we were trashed. So we bailed with the thought of returning after some rest.

After a few days we changed our plans. The idea of trying the same crux pitch again seemed boring. Instead, we wanted to try the route Stormpillar (A3). But as we walked towards the wall we saw a beautiful line of dihedrals left of Freya. Because it looked quite blank in parts we thought it could be committing and maybe impossible. We didn’t think our chances of topping out were high but decided to give it a go anyway. Little did we know that this decision would lead us far outside of our comfort zones.

With gear for a one day free-ascent we started off by simulclimbing the bottom part of Freya to pitch 13, which took us a couple of hours. This is where the wall steepens and we entered new and unknown terrain. It was hard to force ourselves up the headwall because protection looked nonexistent. To access the line of dihedrals we had to round an arête. Protected by suspect micro- wires Andreas managed to get around the arête just to be kicked off by tricky moves and shaky legs. The result was a painful slide down the arête which cut both ropes to their cores. After a few terrifying falls on this section, he finally figured out the moves and managed to enter the dihedral, using all the tricks in the book. We struggled our way further up the wall in a constant state of fear due to poor protection and demanding friction climbing. Our free climbing ethics were long gone and we used any available technique to get higher.

Time passed quickly and after four hard pitches midnight was upon us. We were wrecked but still had a blank section of about 30 meters above us to reach easier ground. We could not see if there would be any good protection on the pitch above and we did not feel like going for it. Once again we decided to give up and return to camp defeated.
After the first attempt the weather changed for worse and remained unstable. We waited in hope for good weather to roll in before the end of the trip. To calm the nerves Andreas was forced to start smoking again and we drank all the alcohol we’ve had. Fortunately between showers we climbed a couple of shorter routes of great quality. Andreas tackled some first ascents in Festvåg around grade 8/8+ (f 7c) and together with Martin Skaar Olslund nabbed the speed record of the classic Presten a 400 meter wall in only 43 minutes.

Luckily after 10 days the clouds finally cleared out. We started on our second attempt on the 8th of august, this time prepared for a one night “polish style bivy” (no sleeping bag). Because the intro slabs remained wet we accessed the route by climbing a system of steep grass-ledges from the left. This approach to the route is not for the faint of heart and not preferable. We started climbing on the route from pitch 9, this time free climbing every pitch, alternating leads while the follower also free climbed everything. It was demanding and heady, especially falling repeatedly on suspect micro wires. By the time we got to pitch 16 we were at our wit’s end. Now it was time to tackle the hardest part of the wall, the crux-pitch. I started off by figuring out the starting boulder of the pitch and soon got up to next crux, a slippery traverse under a small roof. After quite a struggle and plenty of falls I figured out this section and climbed further believing the rest of the pitch would be easy. But as I got higher protection got worse. Caught by surprise I suddenly realized my situation and my head started spinning.

I was high above my last piece and the climbing was desperate and awkward, relying on smears. As in many places on the route, commitment is the only solution to reach easier ground. Instead of that I just stopped and started desperate shouting. I felt completely paralyzed but Andreas as a professional psycholog not only kept calm but also repeating “you can do it, relax, you’re safe” conducted successful, relaxing therapy. Most likely in his place I would just suggest to jump and get it over with, hoping for the best, but his method worked. I got thru the place, then finished the pitch and to my big surprise free climbed the whole thing on the second go.

Now we were at our previous highpoint and I looked up at the blank wall above. We both knew the first 10 meters have almost no protection and neither did we want to experience a long factor two fall. Andreas started off, looking shaky at first but got himself together to commit through the starting run out. “Hmm spooky.”- Was the only comment he gave as he placed the first piece of decent protection in a small seam.

Towards the end of the pitch the climbing got more desperate but with decent protection. After a few falls, which nowhere on the route were “easy” to take, Andreas switched to french-free mode to reach a nice big ledge just before dark. There we shivered through the night hoping for the sun to rise. But Vågakallen is the biggest mountain in the region. It seems all nearby clouds just get stuck around its peak, and a cold mist soon surrounded us. Waking up at 5 am, just to rappel down to try a dangerously run-out 8a was a bit of a heavy breakfast! But it was the only breakfast we had since Andreas ate all of our food the previous day. After a great effort Andreas climbed this last hard pitch free and we continued on easier terrain just left of the last aid pitch of Freya to join with Storpillaren via which we reached the summit.. Luckily the rain we feared never materialized and the rest of the day was spent walking down from Vågakallen.

It was a great adventure. One of the most challenging I’ve experienced and my first big climb after my accident a few years back. It would not have been possible without good team work and for sure would have been harder without support from friends. Big thanks to the following people and others who contributed to make this possible in different ways: Robert and Daniela Jasper, with the first ascent of Freya. Oscar Alexandersson and Sindre Sæther for useful beta. Sjur Hauge who lent us key protection (offset microwires). All the friendly locals who gave us lifts along the roads and candy on descents. Finally Karolina Adamowska who supported us spiritually and most importantly nutritionally!