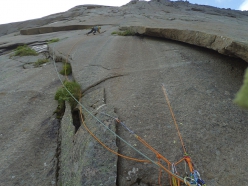 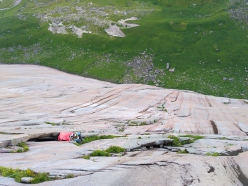 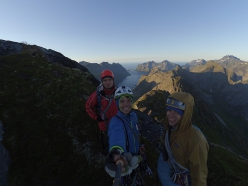 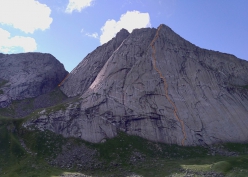 Russian climbers Dmitrii Panov, Andrey Panov and Anar Demirov have completed their Arctic Odyssey, probably the first new climb up the East Face of Breiflogtinden on the Lofoten Islands in Norway.

Climbing over a three-day period in July 2017, Dmitrii Panov, Andrey Panov and Anar Demirov Arctic Odyssey established a 950-meter-long route up the east face of the Breiflogtinden in the western parts of the Lofoten Islands.

After a first attempt in 2016 ground to a halt at pitch 9 due to bad weather, the three Russians retuned to Norway last summer to complete their route. Favourable weather conditions and a portaledge proved key to success. The trio breached free climbing difficulties up to 7b and A3 aid, and estimate the three crux pitches will go free at 7c/8a.

"We didn't climb these pitches free because of the abundance of grass in the cracks, lack of water and lack of time" Dmitrii Panov told planetmountain.com "but in any case I believe the route is now ready to be climbed in free. "

Most of the belays were bolted for "safety reasons", and four bolts were added along the pitches to protect the "otherwise dangerous slabs". The rest of the climbing is protected with nuts and friends and sports huge run-outs up to 20 meters. The descent can be carried out by abseiling down the route or waling on foot down the couloir.

While the south face hosts three climbs including One hundred Years Later (Ivan Calderon, Fredric Pisani, Fernando González Rubio, Simon Kehrer, Helmut Gargitter, 2013), according to all research the east face had not been climbed completely. An attempt was made in July 2008 by the Spaniards Miguel Angel Adrados, Angel Castro, Pablo Luque and Ramón Turrado.

26.09.2013
Just us and the wind. Vertical adventures beyond the Arctic Circle
The report of the beautiful climbing trip up North, between the sea and the rock faces on the Lofoten island, Norway. By Giovanni Zaccaria and Alice Lazzaro.