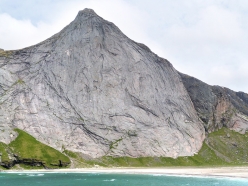 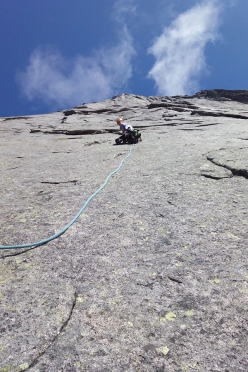 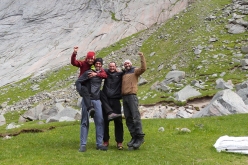 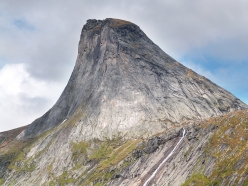 In summer 2015 Guillermo Cuadrado, Gerber Cucurell, Jordi Esteve and Salvador Llorens climbed two new routes on the huge Helvetestinden Wall and one new route on the Selgstinden Pillar on the Lofoten Islands, Norway.

In June 2015 we visited Norway's Lofoten Islands in search of unspoiled rock, new routes and adventures. After two flights and a day's drive we arrived at Moskenes where a little boat took us to the end of a fjord. A short walk led us to our first destination: the SE Face of Helvetestinden Wall.

We installed our camp at the beach, about 100m from the base of the wall, close to a whalebone that proved very useful as a dinner table and seat. We were faced by a 600 x 600 meter face and in our minds we knew we wanted to climb it in a very clean style: with two 45 meters ropes, 12 friends and a rack of nuts, no pitons, no bolts. We depended of ourselves and our skills to find the right path and predict the risks this wall presented us with.

After a starless night Gerber and I were the first to start. But our attempt finished after just 80 meters, the upper, compact wall had no clear crack system and made us fear the worst. We rappelled without leaving anything behind.

We returned to our tent to have a coffee and re-think our strategy. Half an hour later we returned to try a line on the left-hand side of the face. We progressed quickly until we encountered a compact wall that blocked the path. It looked very difficult and insurmountable. The descent at this point would have been complex and involved leaving behind the little equipment we had. But the wall offered a small ledge system that, pointing downwards, led us to a dihedral system that opened the path to the top. At 23:00 we reached the summit, and called our route Terra i Mar.

While we was climbing, Muna and Guille, climbed the a new route up the SE Pillar which they called Tradicionarius. The following day we rested and they made an impressive ascent along the middle part of the wall, solving a great puzzle. The route they climbed is called Noensfoten

Several days later we left the beach and went to investigate the Kirkejfjord area. And then near tragedy struck: Guille, while walking down after having made the first ascent of the West Selgstinden Pillar with Gerber, suffered a serious accident. He slipped down slopes on the NW face and fell 100 meters. Miraculously he survived, but he suffered multiple fractures, various injuries and a serious cervical spine fracture. The rescue service responded quickly, transporting Guille in less than two hours to Bodo Hospital where he was looked after by the excellent medical team. We went to Bodo to stay with Guille until his brother took over and then began our trip back to Barcelona. Guille has recovered 90% and he is already climbing long, difficult routes.

We will back soon!