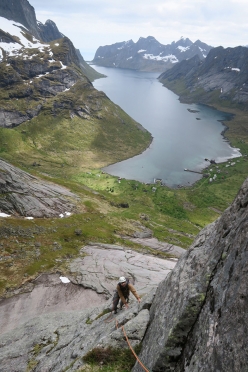 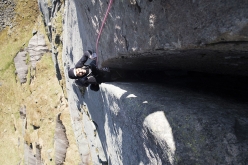 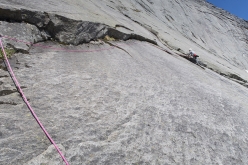 Lofoten Islands: during the attempt at climbing a new route up Moltbaertinden
Photo by Gerber Cucurell 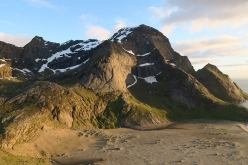 Between 2016 and 2017 a series of new rock climbs were first ascended on the Lofoten Islands, Norway, by the Spanish climbers Guille Cuadrado, Gerber Cucurell, Pau Gómez, Jordi Esteve and Felix Queipo established up peaks Marklitinden, Storskiva, Merraflestinden and Moltbaertinden.

Catalan climbers evidently have a penchant for the Lofoten Islands in Norway. After climbing various new routes in 2015, the Barcelona-based group of alpinists comprised of Guille Cuadrado, Gerber Cucurell, Pau Gómez, Jordi Esteve and Felix Queipo returned in both 2016 and 2017 to climb various new routes, listed below. All climbed were ascended alpine style, without using bolts, pegs, fixed ropes or portaledges. Interestingly, the remarkable Moltbaertinden wall has quite possibly remained virgin as the climbers backed off from an unprotectable slab, preferring not to place bolts and hopefully return better and stronger in the future to complete this as a clean trad climb.

02. Sjømann (450m 6)
First ascent: June 2016 by Felix Queipo and Gerber Cucurell
The route climbs some​ very bold slabs at the bottom and then follows a crack system until join​ing​ “Hungry Eyes” route. Grass at the top.
More information: http://escaladatradicional.com/marklitinden-south-face/

Markitinden North Face
03. North Dihedral (450m 7/A1)
First ascent: we don’t know for ​su​re​. Jordi Esteve and Guille Cuadrado climbed this route in june 2017. They thought ​they ​w​ere​ making the first ascent, but they found a piton in the middle of the wall. The route is serious, wet and some pitches are loose.
More information: http://escaladatradicional.com/climbing-lofoten-marklitinden/

Merraflestinden
05. Syv Veggen (480m 7+)
First ascent: June 2017 by Jordi Esteve, Guille Cuadrado and Gerber Cucurell
This route follows​ a fine crack system. There is a very bold off-width if you don’t carry on a BD Camalot #6 or similar. It is absolutely ​required​ master 7+ grade on the crux​​.
More information: http://escaladatradicional.com/climbing-lofoten-merraflestinden-syv-veggen/

Moltbaertinden
06. This wall is ​possibly​ unclimbed. We attempt it in May 2017 (Jordi Esteve, Guille Cuadrado and Gerber Cucurell). In the middle of the wall, we found a 8m slab ​that ​was no​t​ possible to protect in clean climbing. After this slab it seemed ​that ​we could follow a crack system up to the top, but we prefer​ed​ to abseil ​rather ​than use one or two bolts. We prefer ​to ​improve our technical, physical and psychological conditions, and try the wall in the future in the same style: clean climbing.
More information: http://escaladatradicional.com/climbing-lofoten-moltbaertinden/