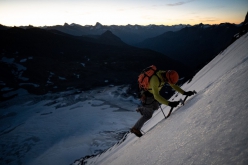 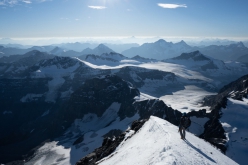 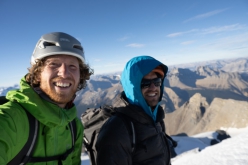 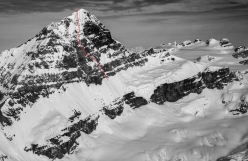 Alpinists Alik Berg and Quentin Roberts have made the first ascent of the hitherto unclimbed and impressive East Face of Mount Forbes (3612 m) in the Canadian Rockies.

Standing 3612 meters tall, Mount Forbes is the highest mountain in Banff National Park in the Candian Rockies, guarded by a formidable East Face that can be seen clearly even from a great distance. Eyed by many, somewhat surprisingly the face was never previously attempted, and Quentin Roberts and Alik Berg have now made the first ascent of this plumb line a three-day push.

Berg had scoped various possibilities for the ascent while climbing a new route on neighbouring Mount Outram with Maarten van Haeren last year, and despite warm conditions this autumn Roberts and Berg hoped to find conditions similar to those that Uisdean Hawthorn and Ethan Berman had encountered while climbing the Emperor Face on Mount Robson a few days earlier: warm in the valley and frozen terrain up high.

The duo approached the mountain on the 1st of October, climbed the face the next day past difficulties estimated at M4 WI3, and descended on the 3rd of October. In an email to planetmountain.com Roberts explained

"To access the face you have to approach for 27ish km (~17mi) to a bivy below the north glacier. From here you can see the North Face (which Jon Walsh and Ptor Spriceniecks first skied in the fall of 1997), but you can't see any of the East face. You only really get to see it the day you go climbing. The approach is an adventure in itself. We hiked for 9 hours to our bivy, walking along beautiful lakeshores, up moraines, and had a customary Grizzly encounter. It took us less time on the way out, perhaps because it was downhill and we were soaked from the rain.

We accessed the face via a shoulder off of the North Glacier under a bright moon, gaining around 800m and losing around 200m elevation in the process. The face came into view, just as the first light was cresting the horizon. At this point we didn’t really expect much to be frozen. We had both woken up sweating and hot the night before. Sure enough, a lot of the features that we had planned on climbing on were not there because it was so warm for this time of year. It wasn’t too hard to find our way around the features, but we were lucky everything connected at a moderate difficulty and we could connect into the same system to access the summit. The climbing was sustained and technical, but never overly difficult (M4) and we climbed the route in mostly short simul pitches from sheltered spot to sheltered spot. The conditions were perfect in every way apart from the temperature, and we were lucky that we were still able to manage it."

First Ascent of Mount Forbes East Face with @alikberg Last photo shows the line! - It sure didn’t feel like October!! The ice was falling apart, so we found a sneaky way up in shady gullies and on snowy ledges. - We simul climbed the whole way and @alikberg climbed to the summit in a t-shirt!! - @arcteryx @lasportivana @petzl_official #firstascent #forbes #eastface #rockies #banff #sunrise #sunset #newroute #climbing #alpineclimbing #alpine