Mount Robson Emperor Face: Ethan Berman below at the start of one of the crux pitches about to launch into the steepness above, while making the first ascent of Running in the Shadows with Uisdean Hawthorn, autumn 2020
Photo by Uisdean Hawthorn 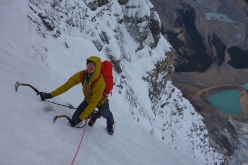 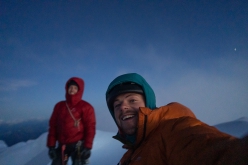 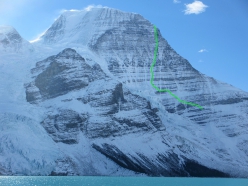 Ethan Berman and Uisdean Hawthorn have made the first ascent of Running in the Shadows (VI AI5 M6 2000m), a big new mixed route up the famous Emperor Face of Mount Robson in the Canadian Rockies.

Standing 3954m tall, Mount Robson is the highest peak in the Canadian Rockies and its Emperor Face on the north side is one of the most cherished alpine prizes in North America. First ascended in July 1978 by Jamie Logan and Mugs Stump, it has since been climbed by some of the world’s best via only a handful of routes put up by Dave Cheesmond and Tony Dick in August 1981, Bary Blanchard, Eric Dumerac and Philippe Pellet in October 2002 (Infinite Patience), Steve House and Colin Haley in May 2007, and Jason Kruk and Jon Walsh in June 2010. In April 2016 the first solo of the face, via Infinite Patience, was carried out by the late Marc-Andre Leclerc.

An important addition to the Emperor was made last week by America’s Ethan Berman and Scotland’s Uisdean Hawthorn, who established Running in the Shadows (VI AI5 M6 2000m) over a period of three days with two bivies. Located to the left of Infinite Patience, it breaks right of the Walsh - Kruk route after the first easy section.

Berman had spotted the line a few years ago and waited until this autumn for best conditions. On the first day Berman and Hawthorn scrambled up easy choss following the original 1974 attempt carried out by Pat Callis and Jim Kanzler before heading up and right into a new gully system and climbing circa 14 pitches to the reach the Emperor Ridge.

Hawthorn explained "In the gully system, we found excellent conditions of neve, allowing fast climbing. After 500m, we hit a steeper band, but there was ice stuck thinly on a rising ramp system which I climbed, albeit with no gear. After easier angled neve we hit the last longer steep section, which we had always been unsure if it would go or not. Ethan tried the ice corner straight above but the ice was to thin to climb safely, and he sensibly backed off. I tried a steep corner on the right, it was full of snow, but it had a crack in the back so at least I could get some good gear. It was very awkward especially with a heavy bag on, I bounce tested two cams in the icy crack and aided on them for the last 2m to move quicker. It felt like climbing a scrappy Scottish VII,8 mixed pitch."

Berman led the next 55m icy mixed pitch, protected by a mere two pegs and a tied off screw of extremely dubious quality. Hawthorn doubts they would have held a fall and as he reached the belay at nightfall Berman confided  "I think I just entered another state of consciousness." Some more bold ice climbing led to good ice in the upper gully system which, in turn, took them to the ridge. By the time they reached this they had been climbing for 19 hours, and had been awake for 23. They prepared a bivi platform, cooked and settled in for the night.

Reaching the summit the next day proved more challenging than expected due to poor visibility and the arduous 800m traverse along 45-degree ice to avoid huge rimed up gargoyles. They reached the top after 12 hours of climbing; amazingly, the final meters were above the clouds, providing for spectacular views in the west. Berman and Hawthorn bivied on the summit and completed the tiring 3000m descent without further difficulties the next day.

This was Hawthorn’s first visit to the mountain and after the ascent he reflected "Alpine climbing in the Canadian Rockies has a huge feel to it. Any big routes I have done here resemble climbing in the Himalayas much more than the Alps, this route was no exception. It is one of the wildest and out there routes I’ve ever climbed."