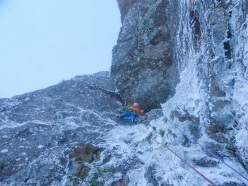 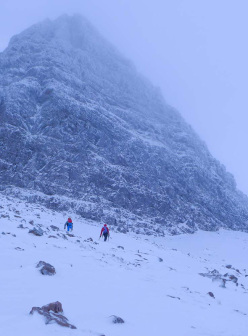 PORTFOLIO / gallery Portfolio: The Messiah climbed in winter by Boswell, Robertson and Hawthorn

The Messiah climbed in winter by Boswell, Robertson and Hawthorn

On 02/02/2015 Greg Boswell, Uisdean Hawthorn and Guy Robertson made the first winter ascent of The Messiah on Beinn Bhan in Scotland. This is the third onsight ascent of a Scottish grade X route in a fortnight.

After making what is believed to be the first onsight ascent of a grade X/10 winter climb in Britain - The Greatest Show On Earth on Cul Mor in mid-January - and then repeating this performance 10 days later with Range War at Creag an Dubh Loch, on 2 February Greg Boswell and Guy Robertson achieved an unthinkable hat trick by making the first winter ascent of The Messiah on Beinn Bhan. The route in question had been first ascended by George Shields and Bob Jarvie in 1972 and is rarely repeated due to the poor rock quality. This February Boswell and Robertson teamed up with Uisdean Hawthorn to tackle the eight-pitch outing which, like the other two, is to be considered one of the hardest and most dangerous onsight winter ascents in Scotland to date.

The route climbs a loose line up the triangular Giant’s Wall, described eloquently by Robertson as "quite literally an assemblage of giant sandstone blocks, shards and monoliths, precariously held in place by moss, soil and various breeds of vegetation. In places one can peer down into great cavernous shafts behind gigantic loose flakes, seemingly leading onwards and downwards to the very bowels of the Earth. The Entrance to Hades perhaps? In winter, of course, a plentiful supply of water oozing from the abundant greenery soon freezes to provide glue in the form of ice."

The trio set off early in the morning and topped out in the dark, after having onsighted two grade X pitches, Richardson one, Boswell the other. Their success marks what Simon Richardson of Scottish Winter describes as "an unprecedented run of high standard Scottish winter climbing".

Writing to Richardson, Boswell explained: "We didn’t intend to go out and climb three new Grade X’s in succession. It just happened to be that we’ve been waiting for these routes to come into condition for the past few seasons, and with the stormy weather this winter, they have all come into perfect condition. So we grabbed them while they were hot. This also happened at a time when Guy and I both were at the peak of our fitness from an earlier extended period of training due to bad weather conditions. But yeah, it was more than I could have wanted; all the training and route planning paid off with three big routes, and to have them be three hard routes is the perfect scenario. Scottish winter at its best!"