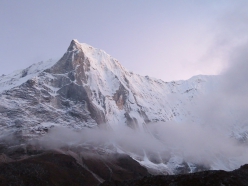 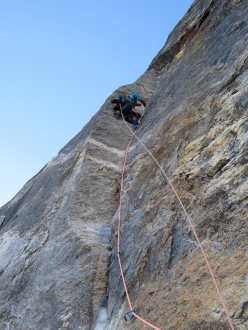 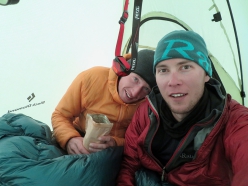 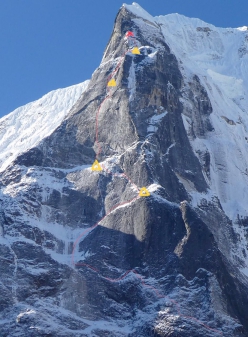 From 11 - 16 October 2019 alpinists Quentin Roberts from Canada and Juho Knuuttila from Finland made an impressive attempt of the unclimbed North Pillar of Tengkangpoche (Teng Kang Poche) in Nepal. Knuuttila reports about their first proper experience climbing in the Himalaya.

On their first visit to the Himalaya, from 11 - 16 October 2019 alpinists Quentin Roberts from Canada and Juho Knuuttila from Finland made an impressive attempt of the unclimbed North Pillar of Tengkangpoche, also referred to as Teng Kang Poche, in the upper Khumbu region of Nepal. While the mountain's North Face was first climbed by Swissmen Ueli Steck and Simon Anthamatten in 2008, the striking pillar has seen several attempts in the past, the most notable being that of Matt Maddaloni and John Furneaux. Supported by Paul Bride, in 2006 the duo climbed in capsule style, reaching an altitude of 5600m after nine gruelling days on the wall before being forced to abandon their attempt.

This season the Canadian and the Finn climbed in alpine style, shunning a portaledge or hand drill, and taking food for seven days, a small tent, pitons, double rack, a single rope and 6mm tag line. They planned to climb the line "in pure style or not at all".

Knuuttila and Roberts breached the previously unclimbed headwall and climbed to within 100m of the top of the pillar, where they encountered steep, unprotected slabs that were no longer covered in ice. At this point they turned back, having reached a high point of 5930m and after encountering difficulties up to M7, A3, 5.11.

Quentin Roberts, Tim Banfield and I arrived to Nepal in mid-September after a very hectic time picking a new objective, as the situation in Kashmir no longer looked particularly safe for a trip. This was the second change, as our very first plan had been to try the North Face of Chamlang, but it was climbed in the spring by Marek Holeček and Zdeněk Hák.

We spent the first few weeks acclimatisating around the Khumbu, but the long monsoon and my week-long fever didn't allow for any climbing before the end of the month. We tried to climb Cholatse at the beginning of October via the normal SW ridge route, but snowy conditions stopped Quentin and Tim at 6100m. I only slept one night at 5600m before descending as I still felt weak from my sickness and the altitude.

After Cholatse we went back to Namche Bazar to recuperate and then moved up to the beautiful village of Thengpo (4350m), which is located just below the northern aspect of Tengkangpoche.

We studied the face for two days from the village of Thengpo, then Quentin and I packed food for seven days, gas for nine, pitons, double rack, a single rope, 6mm tag line and a light tent to our two 45l backpacks. No portaledge, bolts or a hand drill. This line would go with pure means or not at all.

In the early morning of 11th we approached the face and a ramp spotted by Tino Villanueva and Alan Rousseau, the friendly Americans climbing nearby Tengi Ragi Tau. The ramp gave us easy access to the face skipping the lower moss-covered and snow-free part of the wall. Still we did some frozen turf climbing and the odd traverse. The ramp goes left from below the pillar where the route climbed by Ueli Steck and Simon Anthamatten goes right. We passed our planned bivy spot early and reached a better one at 2pm at 5400m. A very good start!

Our second day on the wall was quite short climbing wise. Only 150m ascent to the base of the steep headwall (5550m), but thin ice ramps and tricky mixed slabs offered enough action. Climbing was like on the North face of Grandes Jorasses. The second would follow the leader with a bigger pack and climb everything 'free' as well.

Quentin fixed a rope some 30m up the headwall in the evening before we crashed into our tent, trying to rest as much as possible before entering the vertical playground of the headwall the following morning. What would it be like?

When the morning sun hit the wall we launched. Pitch after pitch of steepness followed. It was definitely Quentin's terrain as he fluently aided, free climbed and mixed climbed, sometimes doing all of the above in one pitch. The sun was quickly gone, but Quentin kept the rockshoes on for quite a long time. We passed Matt Maddaloni's and John Furneaux's 2006 highpoint at 5600m. That was the highest rap anchor we found. They had climbed for 9 days to reach that point. We had used 2.5.

Now the terrain would be totally virgin even though our line on the lower mountain was substantially different from theirs too. Soon the cracks were filled with ice and it took a long time to find suitable protection and climb them. We hauled both of the bags and I jumared as a second. On the headwall, on pitch seven, it became dark. The spindrift was quite strong and made everything much harder. When I reached Quentin under a small overhang, he suggested a bivy. I agreed. We were still in the middle of the headwall and conditions were tough. We managed to establish a sitting bivy, our legs basically hanging, the tent covering our bodies, spindrift pouring all around us. It would be a very uncomfortable night.

Actually, it was one of the longest nights I can remember. However, in the morning we somehow sorted out our stuff and, despite the spindrift still going strong, we started climbing. It was now my turn to lead.

The angle of the face kicked back and the ice was finally climbable. At times only 15-20cm wide ice strip would hold if you climbed carefully, but then you couldn't protect it as the crack was behind the ice.  I did two long pitches to the top of the headwall. These pitches were probably the best in terms of quality on the route.

We found a suitable bivy spot from a snow ridge at 5880m, but spent a few hours cutting ice with our axes to make the ledge bigger for our tent. Despite our efforts the tent still leaned towards the void.

Day five was our rest day. That miserable night in the middle of the headwall took a lot of energy and we thought that staying still, eating and hydrating would help. It did, but it also took away some of our motivation after so many days on the wall. In the afternoon Quentin fixed the rope almost 50 meters higher, battling up the hardest and most bizarre pitch yet. It was a scary lead to watch.

In the tent we talked about the next day. It seemed that we still had many question marks, but that the hardest terrain was below us. We would try to reach the summit ridge tomorrow. And the 6487m summit the day after that.

The morning of day six was cold, the tent covered with thick frost, our sleeping bags wettish and I had stomach problems which, luckily, seemed to ease with medicine.

We jumared up in the shade. Then Quentin tackled a snow ramp hoping to find features or ice behind the corner that would allow us to reach the next snow ramp which would give us access to the snowy slabs below the ridge. There was nothing. All the ice we had seen from the village was probably just snow, blown off by the wind. Now there was a blank slab, just like everywhere else too. The rock was so compact, and without any cracks!  This section proved to be unclimbable by pure means. Maybe there is ice sometimes, maybe not. Maybe there is another way, maybe not. The crux of the pillar turned out to be right on the top after all...

Quentin traversed back his twenty meter runout and then we started rappelling down the pillar. A long way down, passing all the sections and meters we’d gained during the past six days. It was heart-breaking, yet a natural part of this art of drawing lines on the mountains.

The rappelling went quite fine and we managed to leave only a minimal amount of pitons, wires and cords. They should be quite easy to add to a rack when the next team comes to try this beautiful pillar.

We reached the village of Thengpo when it was dark, greeted by Tim and Phurba, who flashed lights to guide us back to the world of warm beds and delicious Dhal Bat.

Note: We hope that future attempts respect the mountain and climb it it alpine style too, without bolts and a hand drill. Like it should be.