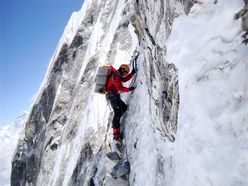 Ueli Steck and Simon Anthamatten have made the first ascent of the N Face of Tengkangpoche (Teng Kang Poche) via their route Schachmatt (2000m, VI/85° ice, M7+/6 A0).

Last week Ueli Steck and Simon Anthamatten made an important alpine-style first ascent of the hitherto unclimbed North Face of Teng Kang Poche via their 2000m route "Schachmatt" (Checkmate).
After snowfall had forced the two Swiss climbers to abandon their first attempt at 6000m on 11 April, the two set off once again on 21 April alpine style, "without any fixed ropes, bolts or cached gear." They climbed up VI/85° ice, M7+/6 A0 terrain and reached the top of the 6350m high face late on 23 April, where they bivvied on the razor-sharp ridge to summit at 7.15 the next morning. They then abseiled down the line of ascent and reached the safety of base camp, and two cans of beer, that same day.
Teng Kang Poche, also referred to as Tengkampoche, is the first stage in Steck and Anthamatten's Himalayan campaign. The two are now successfully acclimatised and on their way to Annapurna I where they plan to climb a line up the South Face.
Tengkangpoche, Nepal 6500m
"Schachmatt" (Checkmate), new route up the N. Face
Ueli Steck & Simon Anthamatten 21 - 24 April 2008
Length: 2000m
Grade: VI/85° ice, M7+/6 A0