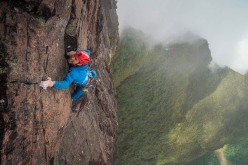 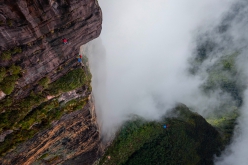 Leo Houlding making the first ascent of his new route up Mount Roraima in Guyana, ABC can be seen far below
Photo by Coldhouse Colllective / Berghaus 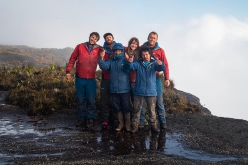 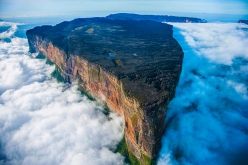 British mountaineer Leo Houlding has successfully led an small international team to establish a new big wall climb up the fabled Mount Roraima that straddles the borders of Brazil, Venezuela and Guyana. After having left the UK on 4 November, the team comprised Wilson Cutbirth, Waldo Etherington, Dan Howard, Matt Pycroft, Anna Taylor and a group of local Amer-Indians air dropped the majority of their equipment close to within the characteristic overhanging prow on the mountain’s north face, then battled their way through 50km of untracked jungle to reach the base of peak.

Two weeks of trekking and ferrying loads were needed prior to establishing an advanced base camp 200m above steep, vegetated terrain, after which they opted to share the start of the first route up the Guyanan side of the mountain, established in 1973 by British mountaineers Mo Antoine, Joe Brown, Hamish MacInnes and Don Whillans.

Houlding’s expedition reached the aptly named Tarantula Terrace, then continued through terrain so steep that despite the rains the rock remained dry and continued tracing a weaving a line through a series of immense roofs to reach the summit on 3 December. Houlding stated the route was climbed completely free and almost entirely onsight, and described it as being a "bold, proud line that fires right up the middle of the prow."

The drop worked. High pressure morning with no margin for error. Flying around the jungle for the first time was sensational, but the mountain was surrounded by cloud. The pilot told us that the weather wasn’t quite good enough to drop at our intended site, and we were low on fuel and it actually looked like the drop might be off completely. But we spotted a lower site, and whipped the plane around to see if it was feasible. Experience played out, and the first load was dumped out of the plane. The parachutes are rigged in a very specific (courtesy of @jwdickinson87 “Q”) way so that the bags hit the floor before the parachutes get snagged in the trees, so they took a little longer to deploy than usual which made for a pretty tense moment as we waited for the ‘chute to pressurise. But after about 5 seconds we saw the canopy fill, and everyone went wild. Minutes later we touched down in Phillipai and met our porters and guides, distributed kit and then spent a night in a hammock camp at the airstrip. Now, as we write this, we’re moments away from shouldering our packs and taking our first steps into the rainforest. . @berghausofficial @coldhouse_ @theadventurepodcast @scarpa_uk @kleankanteenuk @dmm_wales @seatosummitgear @lindewerdelin @leathermanuk @whitbyandco . #RoraimaExpedition #bushplane #TimeToGetOut #Lindewerdelinexplorer #BringYourOwn #ForRealLife #LifesAdventures #climbnowworklater #SeatoSummit #noplacetoofar