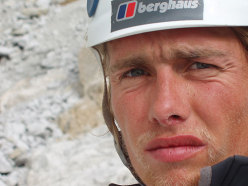 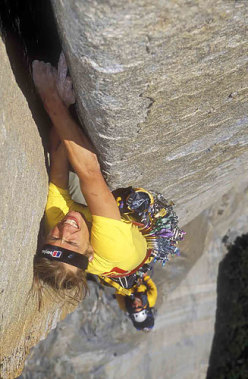 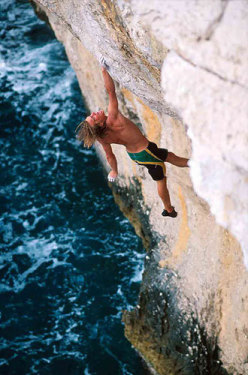 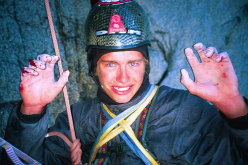 
LEO HOULDING
I started climbing: 1990
The best moment: Marrying my wife Jessica. In climbing first route after year out.
The worst moment: Losing Jose, Roberta, MC and Duane.
Climbing is: pointless yet somehow meaningful. Of course FUN!
If I could change: I'd fly
My book: The Prophet, Kahlil Gibran
My comic: Batman
My song:The Prophet, DJ Beetle or She moves in her own way, The Kooks
I'd destroy: Fundamentalism, gross inequality
I admire those who: give more than they take
I don't admire: egotism, selfishness
I love: life
I hate: getting shut down by the weather
the question I'd prefer never to have to answer: why do you climb
The question I've never been asked: why do you think you are so unlucky?
Sponsors: Berghaus, Audi, DMM, Five-Ten, Adidas eyewear

Climber, mountaineer, but also keen snowboarder, surfer, skydiver, base jumper and nature lover, Leo Houlding is one of the most famous rock climbers and mountaineers in the world.

Leo Houlding certainly needs no introduction. Climber, mountaineer, but also keen snowboarder, surfer, skydiver, base jumper and nature lover, Houlding is one of the most famous rock climbers and mountaineers in the world.

A few years ago Lynn Hill spoke to us about the (young) climber from the English Lake District with sincere consideration. Now, after this interview, we're certain that Lynn wanted to underline not only Leo's indisputable "climbing class" but also something more profound and beautiful.


Many think that climbers and mountaineers are slightly crazy. Many climbers and mountaineers think that Leo Holding is slightly crazy... What do you think? And how did your passion for climbing come about?
I think the whole world is crazy, in particular the western powers’ foreign policies. I do not think I’m crazy. I like to experiment with my limits and love the magic of walls and mountains. Most of all I love all the monkeys with whom we enjoy the playground.
I grew up in the English Lake District, a national park and arguably the birthplace of modern rock climbing with routes dating back to 1850's. My father enjoyed walking and scrambling and with a friend of his we began climbing when I was 10. I hated team sports and was thrilled that I had found an activity that really enthralled me.
After reading some climbing literature and meeting some amazing characters (like Johnny Dawes) I was captivated by the non-conformist, counter culture that exists in the world’s best climbing areas. The different values and action packed lives of these people seemed appealing.

Let's start by something which really struck us: your ascent of Lord of the Flies on Dinas Cromlech. For a British climber this E6 6a represents a great deal. You climbed it when you were just 15, at 2.00am, with a head torch. What did it mean to you at the time? And where did the idea come from?
It had been a very wet week in Wales. I spent my school summer holiday camping in the Llanberis pass, climbing loads and meeting many people who are still my closest friends. One of these people was Tim Emmett. We were in the Heights (the climbers pub) and hadn't climbed for a week. The rain stopped late in the day but it was due to rain again the next day so Tim suggested we go climbing after last orders (11pm). Chris Wentworth came with us. Tim led Right Wall, E5 6a then I led Lord of the Flies, a route that has a big reputation for it's sustained and serious nature. I had done the route once before and was very confident. My head-torch failed on the crux and I had to reverse in total darkness and pull up another in a position where you cannot fall or hang on gear. Then Tim seconded Nightmayer E8 6c (F7c+) on top rope. It was the first of many adventures with Tim that some may describe as crazy. For me it was the essence of experience. We had such a laugh and our motivation was born purely of a desire to enjoy. It turned out to be fine climbing at night and since then I have had to do so many times. It was a successful experiment in limit testing.

You started by trad climbing in Britain, with audacious ascents at the very limit of what is possible. How much does this background influence your ascents now?
I don't like placing bolts, however I don't like removing them and I quite like clipping them when I'm scared. Adventure is what entices me the most and too many bolts kills this. I believe it is better to fail in superior style than to succeed in any other. However the freedom of the walls and the lack of strict rules and regulations is why I love climbing and we must preserve everybody's right to their own thrills. For sure my education in traditional British style has influenced me heavily but I have traveled a lot and spent enough time in other climbing cultures, especially Yosemite to appreciated other styles and ethics.

There can be no doubt that Yosemite is one of your favourite places. Just to cite a few of your ascents: in 1998 you repeated El Nino (the day after the Huber brothers freed it), in 2001 you climbed Leaning Tower, in 2005 you ascended NW Face of Half Dome and Freerider on El Cap. Why Yosemite?
It is Never-Never land, we are the Lost boys and the Rangers are Captin Hook! They will never catch us! The monkeys always send! This place is magical. Half wilderness, half theme park.
At first it is overwhelming in scale, style and commitment. But after a few seasons and with detailed knowledge of a few special techniques and the approaches and descents of the features it becomes a playground, a testing area for styles and ideas. I have been fortunate to climb and learn from Valley locals, this is crucial to quickly acquiring the skills of the game.
Again the best thing about this place is the international community of like-minded individuals. I am here right at the moment and today I have chatted with climbers from 10 nations and now have partners and places to stay in all of them. I do not know anywhere else where it is so easy to meet so many cool folk from so many different backgrounds.

Leo Houlding: more a climber or a mountaineer?
For sure a climber but I love the mountains. I also snowboard, surf, skydive, BASE jump and various other activities. I like the natural world and riding the opportunities it presents.

The 2002 accident in Patagonia. Was this a turning point? Did it change you? Can you tell us about those moments... and afterwards?
I broke the Talus bone in my right ankle really badly in a 20m fall on Cerro Torre. I was trying to free climb a very hard face that would have been A1 with aid. It was a bad decision and I paid the price, 1 year out of climbing. I feel I would not make the same decision if faced with that exact circumstance now. However it had a powerful and profound affect on my life, making me realize there is more to life than hard moves and mile long climbs. I looked to the future and made some prudent financial investments that have already paid off. I can safely say I would not be where I am or who I am today had I not made that bad decision and I am thankful I did. I think my understanding of appreciating the times and the company more than the achievements is in part due to that accident.

Trad routes, solos, big walls, expeditions, speed... what grabs you most?
Depends on the partner. But right now Fast-Free-Para-Alpinism is floating my boat. That is a combination of all these things with a parachute assisted descent.
If I had to choose 1 style above all else it would probably be Deep Water Soloing. Exhilarating, fun and adventurous with virtually no suffering and little serious risk.

Tell us about what you search for in your ascents? What style do you prefer?
On-sight in a day both free climbing is my preferred style but, failing that, take what you can get. I search for memories that I will take to the grave and experiences that enlighten, perhaps?

What relationship do you have with your limits and how do you try to improve them?
We get along pretty well. I feel more confident than ever at knowing my limits but find it harder than ever to push them without severe consequences. Fitness and currency are my limiting factors.

Evolution: where is climbing on big walls heading? And mountaineering?
Fast, Free, First go, then Flying down! And the same in the big mountains!

Your perfect wall?
El Cap - you do not get any better than perfect. Still looking for somewhere as big but steeper for the next experiment!