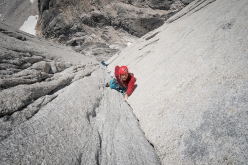 Leo Houlding on the incredible 250m crux corner of 'All along the Watch Tower' on North Tower, Howser Towers, Bugaboos. The 1000m long climb is a major one-day objective in itself.
Photo by Waldo Etherington, Berghaus 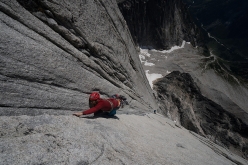 Leo Houlding on the incredible 250m crux corner of 'All along the Watch Tower' on North Tower of the Howser Towers, Bugaboos. The 1000m long climb is a major one-day objective in itself. (photo - )
Photo by Waldo Etherington, Berghaus 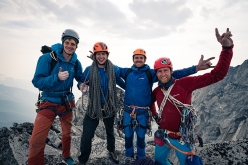 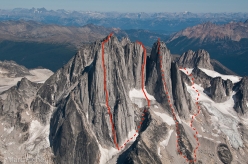 The West faces of North, Central and South Howser Towers, Bugaboos, Canada and the lines of the routes climbed in 23:30 by Leo Houlding and Will Stanhope
Photo by Marc Piché

Bugaboos climbing: Leo Houlding and Will Stanhope enchain Howser Towers in a day

Leo Houlding and Will Stanhope climb the three Howser Towers at the Bugaboos in Canada in 23 hours and 30 minutes. The link-up consisted of 2,000m of climbing up to 5.12+ (7b/7b+). This is the first time the three towers have been enchained in a day.

At the end of August the famous Howser Towers at the Bugaboos granite paradise in British Columbia, Canada, were climbed in less than 24 hours by Britain’s Leo Houlding and Canada’s Will Stanhope.

The two alpinists started climbing shortly before 7:00 am on 29 August, up the 500 m high Chocolate Fudge Brownie 5.12+ (7b/7b+) on the Central Tower. After having simul-climbed the first half they then swung leads and pitched the remainder of the route, reaching the summit after just 4 hours and 20 minutes. The two then descended using ropes they’d installed previously when working the route, fixed 250 meters down into the gully that leads to the base of the North Tower to increase their speed and, importantly, decrease the danger.

At 14:00 Houlding and Stanhope started up Spicy Red Beans and Rice on the North Tower, which acts as a direct start to the famous All Along the Watch Tower 5.12+, regarded as one of the most classic test pieces in Canada. The two climbed past cracks and corners to then negotiate the summit ridge (climbed a week earlier) before reaching the 3,412m North Tower summit at 22:00.

Houlding and Stanhope rappelled down the North Face and after a quick cup of coffee simul-climbed the 600 meter high uber-classic Becky / Chouinard route on South Tower, reaching the summit at 06:30 on 30 August. In totale they needed 23 hours and 30 minutes for this enchainment, described by Houlding as "the ultimate challenge, so hard we nearly didn’t we do it, but on the last day of the trip we managed with just minutes to spare!"